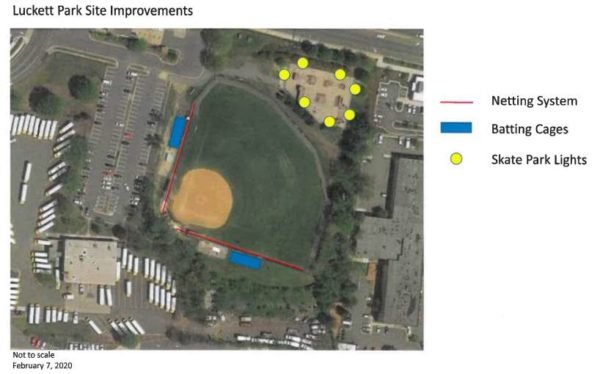 A suite of new improvements could be coming to the Schuyler Hamilton Skate Park and Luckett Field just off Duke Street at 3540 Wheeler Avenue.

The Planning Commission is docketed to review the new safety improvements at the park at the June 2 meeting.

Among improvements planned is new lighting for the skate park.

“Although the skate park is currently not lighted, many young skateboarders use the park after dark, particularly during late fall and winter months,” the parks department said in its application. “Other areas of the park, including the ball fields, are lighted through 10 p.m. The lighting from those areas does not reach the skate park.”

The application says the new lights would be user-activated by pressing a button and would stay lit for one hour unless activated again. The lights would not be able to turn on past 10 p.m.

There are seven new lights planned, each at a maximum of 25 feet up.

Planned improvements also include a new netting system around the ballfield, which would extend above the six-foot fence surrounding the facility.

“The netting provides additional safety to users, spectators and vehicles in the adjacent parking lots from balls topping the existing fence,” the application said.