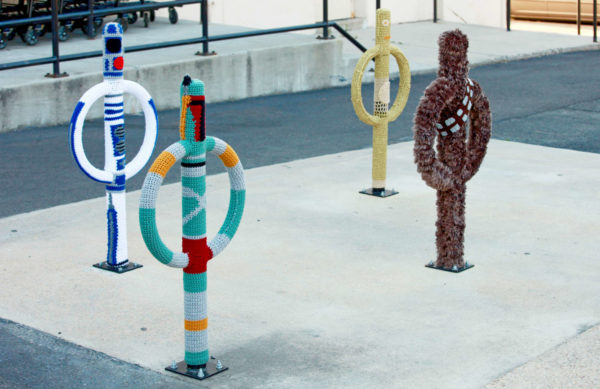 Mike Bostick, the produce manager at Mom’s Organic Market, couldn’t help himself, so he recently yarn bombed the store’s bike racks to look like characters from Star Wars.

“I wanted to do something that was widely known, that people could get right away immediately,” Bostick told ALXnow. “I’m more of a Star Trek fan, but that would be a little too difficult to make.”

Bostick previously made red, white and blue covers for the bike racks on the fourth of July last year, followed up by yellow and black Minion bees after the “Despicable Me” films. He also knits reusable shopping bags for customers.

The bike racks are now made to resemble Boba Fett, C-3PO, R2-D2 and Chewbacca.

“Some people don’t like yarn bombing, because it’s done in areas where people just leave them and kind of abandon them,” Bostick said. “And they’re bad for the environment, but it’s right here where I work. I’m going to see it every day.”

Bostick moved to the area from Oahu, Hawaii, shortly after President Trump’s inauguration, and immediately found an opportunity to knit pink caps for the Women’s March. He said that his mother taught him how to knit when he was 13 years old.

“I knew I could make those pink hats, and I tried to pick it up again,” he said. “I didn’t lose the technique so I was able to still shame and I just took off from there, just kept doing more projects.”

Bostick is thinking about super heroes for his next design, but hasn’t yet made up his mind.

“I’ve been trying to challenge myself, and it keeps me busy,” he said.