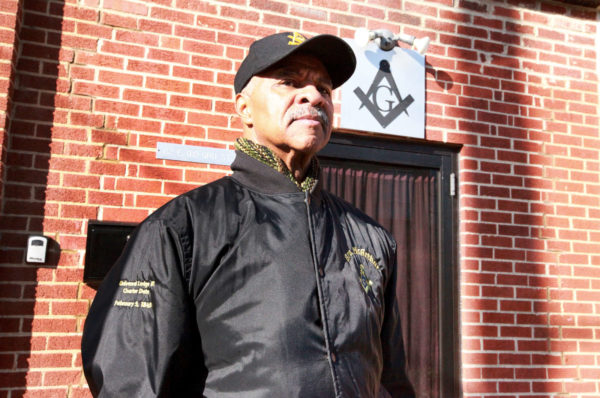 Twenty years before slavery was abolished, there were black Freemasons in Alexandria. This month, Alexandria’s Universal Lodge No. 1, which is the first “Prince Hall” in Virginia, celebrated its 175th anniversary.

“We are standing on the shoulders of previous generations looking forward,” MacArthur Myers, the 174th past master at the lodge told ALXnow. “We have to recognize all who went before us and the responsibility of the stewardship in our presence as we look at the future.”

Prince Hall Masonry, which is historically all black, dates back to 1775 when 14 free black men were initiated by a lodge attached to the British army.

Universal Lodge No. 1 was founded on Feb. 5, 1845, by seamen William Dudley, Benjamin Crier and Sandy Bryant, all of whom became masons in Liverpool, England, in the 1830s. After returning to the states, the men joined the African American Social Lodge No. 1 in Washington, D.C. in 1838.

“Even though it says 1845, many lodges couldn’t come into being until after the Civil War,” Myers noted. “You had millions of previously enslaved people who were granted their freedom, and they had to construct a nation for themselves. They had to build hospitals and schools and they knew that they had to build institutions for the betterment of the masses.”

Alexandria was part of the District in 1845, and Dudley, Crier and Bryant founded the lodge in a secret meeting. The home for the lodge was 424 S. Royal Street in the city’s Hayti neighborhood, and it remained there until moving to its present location at 112 E. Oxford Ave. in Del Ray in 1986. The lodge is well-known in the community for its charitable work, including annual coat drives for Alexandria youths in the winter.

Myers, a retired social worker who was named an Alexandria Living Legend last month, is also the historian for the Most Worshipful Prince Hall Grand Lodge in Richmond. He’s been a member since 2012, and was raised in the company of Freemasons.

“They were different than ordinary men, because you knew about their character, you knew what they were doing in the community and that’s always been faith, hope and charity,” he said. “In Alexandria, you were a member of the Masonic lodge, the Elks, the Departmental Progressive Club and you went to church. Those were the social hubs because of segregation.”

The lodge is historically and culturally an African American club, and members frequently visit other lodges around the world. Myers, who also conducts tours of the George Washington Masonic National Memorial, couldn’t speak of what goes on behind closed doors or how many members there are in the lodge, but said that the applicants have to undergo an extensive background check. Notable members include former Mayor Bill Euille and former Police Chief Earl Cook.

“There’s a fine line between vanity and humility,” Myers said. “A Mason is a Mason is a Mason, and therefore it takes the individual to decide how to you want to treat another Mason. We, in our rituals and in our teaching and learning, are taught about personal growth. For us it’s about brotherly love.”