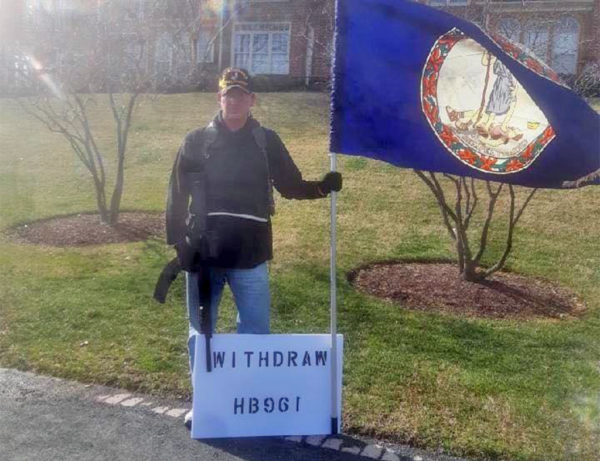 A Republican official from Hopewell, Virginia drove to Alexandria this weekend for a small, armed protest outside Delegate Mark Levine’s home in Old Town.

Brandon Howard, chair of the Hopewell Republican Party and head of the gun group Right to Bear Arms Virginia, walked along the street outside of Levine’s house on Saturday, Richmond public broadcaster VPM first reported. He held a Virginia flag, a large gun, and a sign that said “withdraw HB 961,” referencing a bill Levine sponsored and the House of Delegates passed that would ban assault weapons in the state.

(The bill was shelved in the state Senate on Monday, in a move that made national headlines.)

In a ten minute video posted to the Right to Bear Arms Facebook page, Howard repeatedly stated that his intention was to protest peacefully, though the video also contained promises of retribution should the bill pass and guns start being confiscated.

Levine said when he found out about the protest, he called the police.

“It’s never happened [to me] before,” Levine said. “Having a man outside my house with a gun? No, that hasn’t happened.”

Levine noted that Howard had previously carried weapons through the Alexandria Farmer’s Market.

“His goal is to terrorize our community,” Levine said. “His goal is to terrorize me… I have long argued that guns have three legitimate uses: self-defense, hunting and target shooting. This guy was not hunting, except maybe me, it was not in self-defense… and he wasn’t target shooting. It’s clear that his intent is to coerce, threaten or intimidate.”

Howard said that if all else failed at the soapbox and ballot box, he and others would reach for the “cartridge box.”

“The last thing we want is to shed blood on our own soil,” Howard said. “That’s not to say that will never happen… but unfortunately the way Democrats are doing things today it’s becoming a very real reality that we may see bloodshed on our own soil because of these tyrants sitting in Richmond.”

There was no violence at the protest, but Levine said he hopes Commonwealth Attorney Bryan Porter will press charges.

“This was clearly a campaign of intimidation I happen to think is illegal,” Levine said. “Not the part that people think should be illegal, not the part about marching around outside the house with a gun, but it is not legal to give someone else’s address out with the intent to coerce, threaten or intimidate.”

Howard listed Levine’s home address several times throughout the video. Levine has received a number of death threats since the start of the legislative session earlier this year, VPM reported.

Levine also spoke about the protest in a speech on the House floor on Monday. He said he offered — through the police — to meet with the protestor at Levine’s office on Facebook.

Intimidation and harassment is not the way we settle ideological differences in this country, in our Commonwealth and in our City.

These tactics have no place in our public discourse and do not advance ANY cause.https://t.co/x2ya7he3a2

Levine said the bill’s failure to pass the Senate Judiciary Committee after the legislative crossover was a setback, though perhaps only a temporary one.

Asked about the bill, a spokeswoman for Gov. Ralph Northam told NPR that “we will be back next year.”

In a message on Facebook, state Sen. Scott Surovell — a Democrat from Fairfax County — said he did not vote for the bill because he did not think it would pass the Senate.