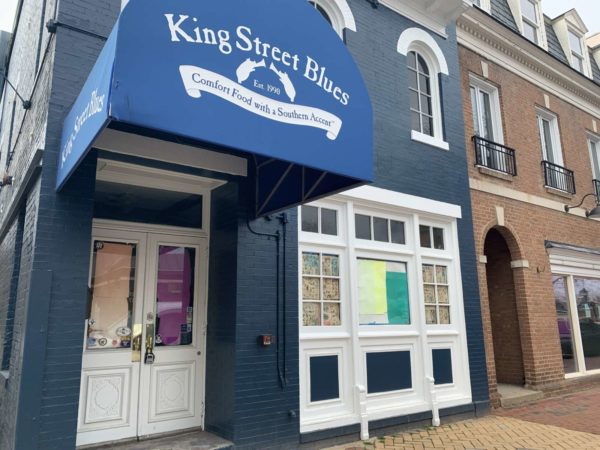 Late last year there were rumblings of some activity at King Street Blues, but it’s official now: a gastropub called Old Hat is coming to 112 N St. Asaph Street in Old Town.

The awning outside the location still says King Street Blues, a former two-story barbecue and southern cuisine restaurant that’s been empty for at least two years. Inside, however, there’s work being done to renovate the space and turn it into a new pub.

Jack Caminos, locally famous for his cocktails in hip D.C. restaurants like Compass Rose and Thip Khao, is opening his own venue with his partner Tim Prosser. Caminos said he has 31 years working in the industry and Prosser has 15, but it’s the first time they’ve launched and owned something for themselves.

“We deeply love this area and it’s one of the few areas that still has true communities,” said Caminos. “Whether that’s Del Ray or historic Old Town, you’re guaranteed some community personality. Beyond that, we also wanted a place that was closer to the traditional restaurant and bar clientele.”

While the venue will have traditional American gastropub fare, Caminos said some of their favorite Asian and Eastern European-influenced dishes may be offered as well.

Too often, Caminos said D.C. bars turn into venues where most of the communication takes place on people’s phones. Caminos said his vision for Old Hat is a place that puts the “public house” feel back into the pub.

“The reason we chose this industry is it’s a great place to interact with people,” Caminos said. “There’s a common experience of going out. It’s nice knowing we can have a place where people will come together and socialize. Even though there’s a lot of anxiety — it’s physically and mentally exhausting — it’s exciting.”

While there are a number of factors out of their control, like the timing of restaurant inspections and permitting, Caminos said he believes April is a realistic timeframe for the new pub to open.