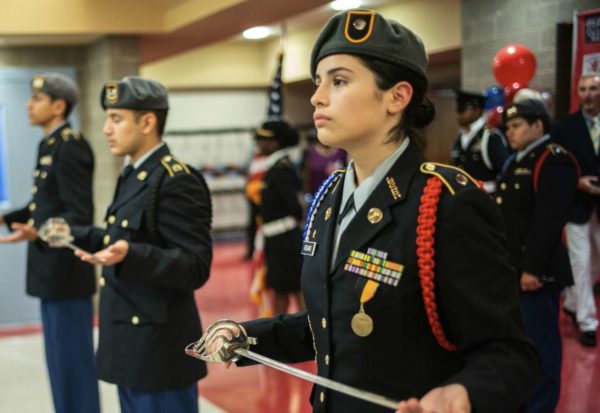 A T.C. Williams student and JROTC cadet will be attending tonight’s State of the Union address at the Capitol with Sen. Tim Kaine (D-Va.).

Kaine invited Nicole Rosario-Flores after meeting with cadets at the high school last month and discussing his bipartisan war powers resolution, intended to limit the president’s ability to deploy troops without Congress’ approval.

The senator said in a statement, below, that “it’s important to hear from young people who have a large stake in this debate.” Alexandria City Public Schools, meanwhile, tweeted that the school system is “thrilled” that Rosario-Flores will be able to take in such a unique experience.

Today [Monday], U.S. Senator Tim Kaine, a member of the Senate Armed Services Committee, announced that his guest at Tuesday’s Presidential State of the Union Address will be Alexandria, VA native and JROTC Cadet Nicole Rosario-Flores. On January 10th, Kaine met with Cadet Rosario-Flores and other JROTC cadets at T.C. Williams High School in Alexandria. Kaine talked to the students about his years-long efforts to reclaim Congress’s constitutional duty to weigh in on whether the nation goes to war, including his bipartisan war powers resolution to prevent further escalation of hostilities with Iran.

“I’m excited Cadet Rosario-Flores will join me as my State of the Union guest on Tuesday,” said Kaine. “I was so impressed with her and all the T.C. Williams High School JROTC cadets I recently met with to discuss my bipartisan war powers resolution. The legislation is about ensuring we don’t send our troops into harm’s way unless there’s a carefully reached consensus in Congress that war is in the national interest. Any time we’re in the middle of a discussion about matters of war and peace in Congress, it’s important to hear from young people who have a large stake in this debate.”

“I am thrilled and honored to be Senator Tim Kaine’s guest at the State of the Union Address. I am equally grateful for the JROTC program at T.C. Williams High School that is truly one of a kind, has opened doors for me and given me the opportunity to attend such an important event as this one. Having the opportunity to witness the way our government functions first hand will definitely be something that I will always remember,” said Cadet Nicole Rosario-Flores.