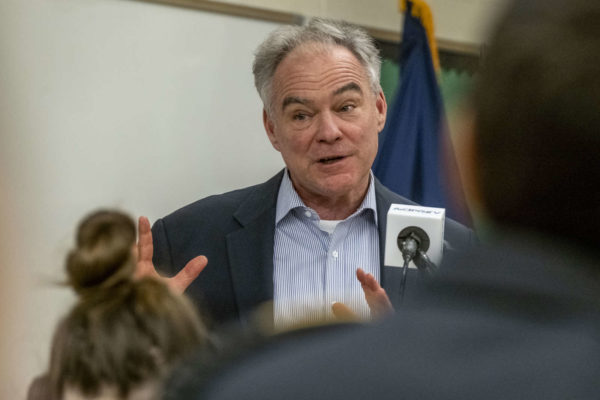 Sen. Tim Kaine (D-Va.) was careful with his words at T.C. Williams High School on Friday.

The lawmaker spoke for more than an hour to JROTC students about his war powers resolution, which would limit the president’s ability to strike against foreign countries without congressional approval. Kaine said that the Trump administration’s Jan. 3 assassination of Qasem Soleimani outside Baghdad International Airport was based on U.S. intelligence that fell “far short of what I view as an imminent threat.”

“It’s not just the striking Soleimani, though. It’s doing it in Iraq, a nation that’s an ally when they have objected to it and doing it without informing Congress or any congressional authorization. It’s the combined weight of all of those together that has made this so controversial,” Kaine said, adding that he has taken out all reference to President Trump in his resolution. “I’m trying to, you know, maximize the support [for the bill.]” 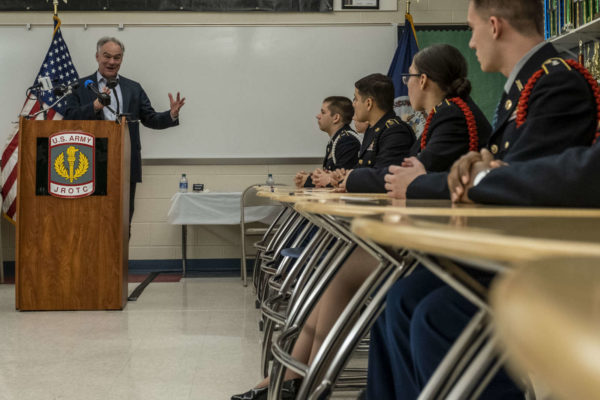 Kaine introduced a war powers resolution last week in the Senate, which would limit the president’s ability to conduct such strikes against foreign countries. The resolution, he said, will likely go to the Senate floor after the upcoming Democratic Presidential debate on Tuesday, Jan. 14., when three of the candidates will be able to vote in its favor. A similar bill just passed the House of Representatives. 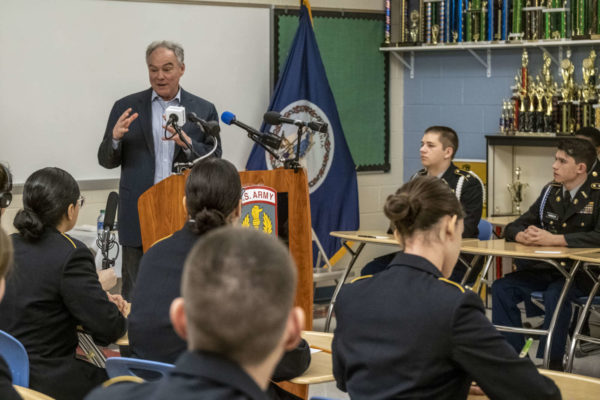 Cadet Command Sergeant Major Andy Ramirez is planning on joining the U.S. Military after graduating from T.C. this year, and said that meeting Kaine was the opportunity of a lifetime. He also called the recent U.S. action in Iraq “very concerning.”

“Having the Senator, who is so well informed of what’s going on around the world, to be conducting a whole conversation with high school students, it’s just a great opportunity to be a part of it. For us to be able for us to be able to have a voice, talk to the Senator about things that are happening, like in Iran,” Ramirez said. “Like, it affects everybody, not just people in the military, but their family and friends.” 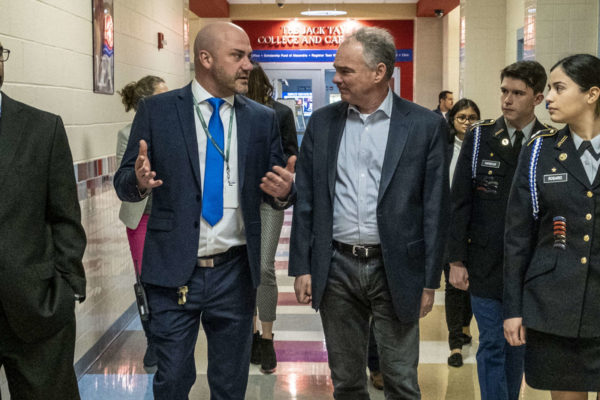 Kaine believes he has solid support from Senate Democrats, and from at least two Republican Senators, Rand Paul (KY) and Mike Lee (UT).

“We have a good relationship with Iraq that have been purchased with an awful lot of American blood and treasure,” he said. “Now Iraq is asking us to leave. If we leave Iraq, my prediction is that Iran is going to get more powerful there.”