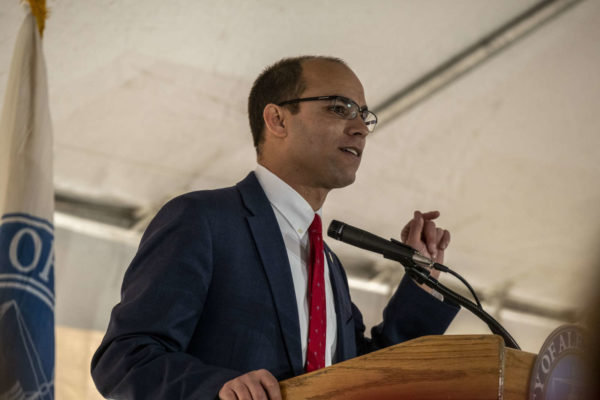 Alexandria Mayor Justin Wilson is one of six mayors who are making a difference and “shaping urban America,” at least according to The Hill newspaper.

Wilson made the list, which was published Wednesday, alongside the mayors of Kansas City (M0.), Tampa, Brooklyn Park (Minn.), Minneapolis and Phoenix.

In its write-up, the paper lauded Wilson and the city for helping to bring the Virginia Tech Innovation Campus to Potomac Yard, in conjunction with Amazon’s HQ2 coming to Arlington.

More from The Hill:

…when two local governments just outside of Washington put together their bid for Amazon’s HQ2 project, they decided on a different approach, one that would provide a lasting benefit to the city of Alexandria and Arlington County even if Amazon’s tax revenues didn’t fill the gap. To prove to Amazon that its residents would be qualified for the estimated 25,000 high-tech jobs the company would bring, the cities helped bring a new Virginia Tech campus to their region.

“There was very much a feeling that the benefits of the [Amazon] investment were going to accrue to a very small percentage of the residents,” said Justin Wilson, the Democratic mayor of Alexandria. “We felt like there was an opportunity to chart a different course.”

Working together across their shared border, Alexandria’s government and the Arlington County Board… are planning for new housing growth, workforce development, collaboration with the new Virginia Tech campus and area schools. They plan special outreach to minority- and women-owned businesses, and they hope to protect low-income housing in minority-heavy communities near Amazon’s coming Crystal City hub.

“We looked at every opportunity that we thought would be able to seize the benefits of this investment and make sure it benefitted everyone in the community,” Wilson said. “We’re still fleshing this all out. The good news is there’s real excitement in the community.”