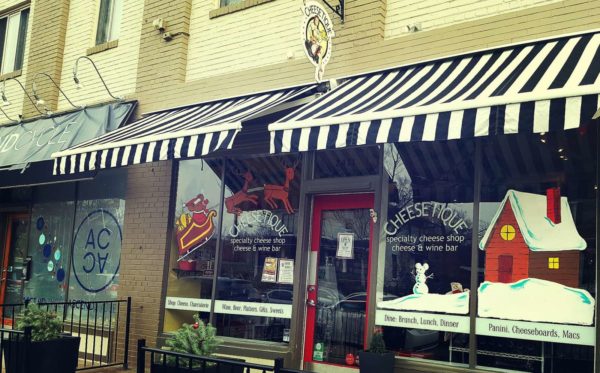 It will be more than a year until Bonaventure Realty makes a move on plans for a swath of properties it recently purchased along Mount Vernon Ave. in Del Ray, according its Vice President Jeremy Moss.

The company, which last summer bought the properties at 2401, 2403 and 2411-2419 on Mount Vernon Ave., has no immediate plans for changes and jumped at the chance to purchase the properties.

“The reality is that when the properties became available, this was a once in a generation opportunity,” Moss told ALXnow. “All the current uses have remained the same. We still have retail and residential uses, and we intend to honor the existing uses in place.”

The properties include the Alexandria Department of Community and Human Services (2525 Mount Vernon Ave.), which has a lease for an additional 2.5 years, as well as Cheesetique (2411 Mount Vernon Ave.), the recently shuttered Catch on the Avenue restaurant, a number of retail and residential properties and a 144-space parking lot across from Pat Miller Square on Mount Vernon Ave. and E. Oxford Ave.

Moss said that Bonaventure will make no moves on the area until the city updates its  2005 Mount Vernon Avenue Business Plan and 2003 Long-Term Vision and Action Plan for the Arlandria neighborhood in the spring of 2021.

Gayle Reuter, an Alexandria Living Legend and member of the Del Ray Business Association, said that misinformation has been spreading regarding Bonaventure’s intentions. The rumors, she said, have spread largely because of Amazon’s HQ2 development in Pentagon City, Virginia Tech’s Innovation Campus at Potomac Yard and the recent groundbreaking of the Potomac Yard Metro station.

“I was pleased to get to meet with Bonaventure recently and am excited to welcome them to Del Ray and in hearing their interest in being involved with the community,” Reuter said. “They’ve already reached out to sponsor several of our events, and I think they will be great new neighbors.”

Bonaventure’s President Dwight Dunton was raised in Del Ray and is a graduate of T.C. Williams High School. He’s also a trustee with the Scholarship Fund of Alexandria.

“Alexandria has a place in Dwight’s heart and he’s certainly sensitive to the uniqueness of Del Ray and the vibrancy of the neighborhood,” Moss said.

See: With Amazon on the Horizon, City Begins Update to Arlandria and Del Ray Plans

END_OF_DOCUMENT_TOKEN_TO_BE_REPLACED

More Stories
Ask McEnearney: As a Dog Owner, What Should I Consider When House Hunting?New Laser Tag Bar in West End to Host Grand Opening on Friday