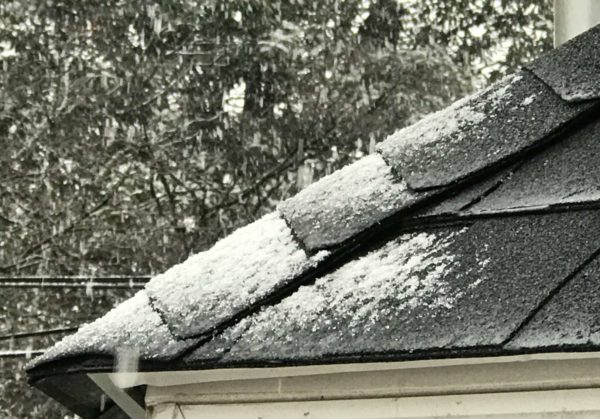 Update at 10:30 p.m. — Alexandria public schools will be opening on a two hour delay Wednesday amid concerns about slick spots forming overnight as temperatures dip below freezing.

Snow has ended, but hazards have not. Patchy fog and icy spots will remain a risk through early Wednesday morning, mainly in locations where snow fell, so overnight motorists should continue to use caution.

Earlier: The flakes are still falling, but the first significant snowfall of the season is starting to wrap up in Alexandria.

The city did not see major accumulation, but with just under an inch of wet snow it was enough to whiten the ground, coat tree branches and add a layer of slush to some local roads.

Alexandria City Public Schools and the federal government dismissed early this afternoon in anticipation of the snow and it was probably a good decision, with heavy traffic reported on I-395 and other major commuting routes.

The snow also prompted libraries and some city facilities to close at 2 p.m., while recycling and Christmas tree collection were suspended for the day — set to resume tomorrow, with some delays possible.

Both curbside recycling and Christmas tree pickup were suspended this afternoon due to the inclement weather. Residents who did not receive service today will be collected tomorrow. Wednesday and Thursday customers may also experience delays as a result.

Alexandria’s Department of Transportation and Environmental Services described the snow as minor, but encouraged locals to keep their cars parked while snow crews worked to clear the streets.

While minor, we do expect to do some road treatment w/ this storm. As a refresher, per the graphic, we start w/ Primary routes, then we move on to secondary. Please keep our trucks moving during rush hrs by staying off the roads. Everything snow is here: https://t.co/CbWexvWVJe pic.twitter.com/k9OQIIWmO7

More snowy scenes from around Alexandria, via Twitter, are below.

Latest in Kings Landing (Yes, it exists and it has nothing to do with Game of Thrones) in Alexandria @capitalweather #snow #alexandria pic.twitter.com/5xCSp8RccX

Snow coming down hard in North Old Town Alexandria. Since I took this it has started sticking to pretty much everything! #snow #dc pic.twitter.com/gugRvjz3dc

First snow of the season is not a disappointment! Nice accumulation in West Alexandria @capitalweather @nbcwashington pic.twitter.com/CeBUdRe9cT