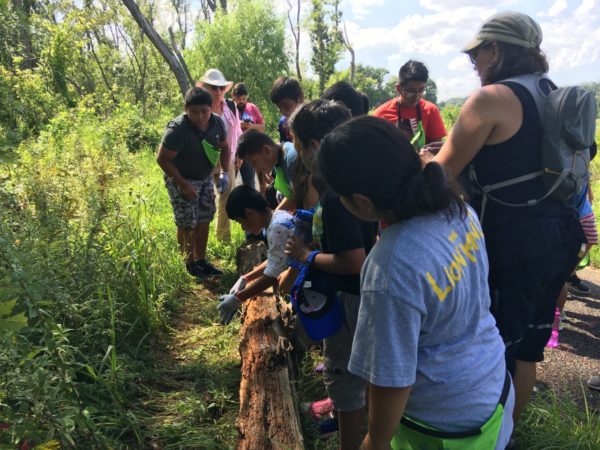 The Four Mile Run Conservatory Foundation was announced as the recipient of a $10,000 grant from Dominion Energy to help local students learn about Four Mile Run — the creek that runs between Alexandria and Arlington.

The funding goes to the Nature Explorers and Restorer Project, which aims to help local elementary and middle school-age children in Arlandria and other surrounding communities, according to a press release.

Participants in the program learn about various aspects of the local ecosystem and use scientific equipment to make observations and keep a journal. The grant will help pay for equipment like binoculars and microscopes, as well as the mud boots and gloves necessary for work in the muddy waters along Four Mile Run.

The Four Mile Run Conservatory is a non-profit established in 2016 to promote natural restoration and advocacy following years of work to return to the wetlands to their natural state.

“Since its founding, the Four Mile Run Conservatory Foundation has engaged more than 450 volunteers in over 3,000 hours of service at lower Four Mile Run, planting more than sixty trees, removing four tons of litter, and documenting over 165 species of flora and fauna,” the group said in the press release.

In August, the group led a series of kayak cleanups where volunteers in kayaks collected 155 pounds of trash, primarily plastic bottles.

A Fall Hawk Walk is planned on Sunday, Nov. 17, at 10 a.m. Guests are invited to bring binoculars and field guides to watch for migrating hawks and other avian residents of the park.