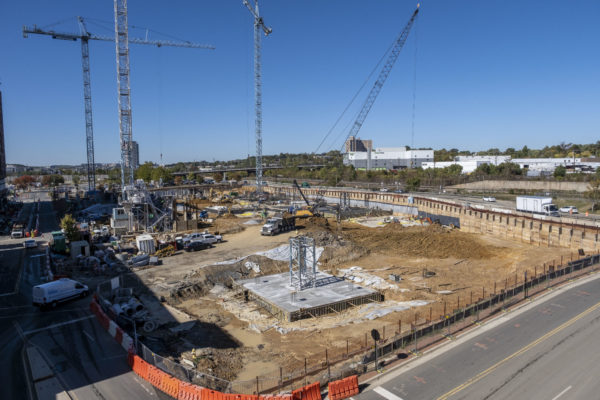 (Updated 2:30 p.m.) Work on the new Wegmans in Alexandria is progressing as construction crews dig downwards.

Cranes and workers could be seen on the site near the Eisenhower Metro today (Thursday) that now resembles a five-acre dug-out after construction on the future $400 million mixed-use development kicked off in August, as reported by Alexandria Living Magazine.

The so-called “Caryle Crossing” development complex is slated to reach as high as 18 stories and include an 85,000-square-foot Wegmans as well as 210,000-square-feet of retail space, and 750 housing units, per the Washington Business Journal. The residential units to be included in the complex at the corner of Mandeville Lane and Stovall Street will be a mix of condos (30), senior housing units (200), and apartments (400.)

Wegmans is expected to occupy the second floor of the building complex, though the grocer remains mum on the specifics.

“We are currently working on the internal store design and will begin construction once Stonebridge turns over the space to us, which is still several years out,” a spokeswoman for the Wegmans grocery chain company told ALXnow.

Alexandria originally gave developer Stonebridge Carras the green light for the project last year, and since then the company has pivoted from building mostly condos to multi-family apartments on the site, according to Patch. The timeline given for completion was originally 2021, but by August the developer was reporting construction would likely last until 2022.

Stonebridge did not respond to a request from ALXnow for more information about the construction work in time for publication.

“This project will provide critical retail and services to boost the quality of life for everyone who works and lives here and deliver some of the best amenities anywhere in Alexandria,” Mayor Justin Wilson told the Business Journal in July.