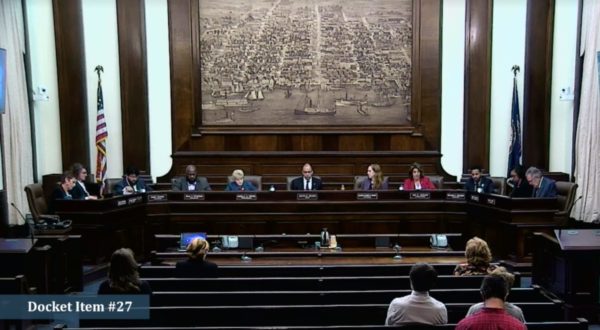 Last night (Tuesday), City Council members voted in favor of keeping guidelines capping rent increases at 5%, but not before arguing over the point of the “symbolic” guidelines, with one member jokingly offering to lower the cap to 1%.

“The question is why, when we have no authority, are we publishing a number that gives people some suggestion that we do authority, when we don’t,” said Mayor Justin Wilson. “We could pick any number here and we’re still going to be in these same position.”

For three decades, the city has issued Voluntary Rent Guidelines suggesting landlords not raise rents too high in a given year, and has issued caps as low as 5% and as high as 9%. However, the city has no way of legally enforcing the cap as Virginia lacks rent control laws. Instead, city staff negotiate with landlords to convince them to voluntarily stick to the cap, a difficult process Alexandria Times has previously reported on.

Alexandria Housing Division Chief Melodie Seau told ALXnow that the negotiations work about half the time.

“Hopefully with the upcoming election we’ll be able to able to implant some sort of rent control if not locally, then by the state, but that’s is big picture,” said Councilman Mohamed “Mo” Seifeldein, referring to the progressive agenda some Virginia Democrats have promised to enact if they win control over Richmond next month.

For now, Seifeldein argued the city’s non-binding guidelines meant Alexandria could and should lower the cap to 3% to help renters. He cited the need to be more aggressive in preserving affordable housing in light of recent warnings about regional housing shortfalls and Arlington and Alexandria’s recent team up to discuss how to prevent Amazon from pricing people out of the region.

“But the thing is that it doesn’t have any teeth,” Councilman Canek Aguirre replied, who said they might as well lower it to 1% if this was about proving “political will.”

Seifeldein agreed, and replaced his 3% proposal with Aguirre’s 1% one.

Councilman John Taylor Chapman echoed the sentiment, said he believed the council was “stretching to make a symbol of this because we want to show that we have political will on housing.”

“I would rather put some people in a unit and get some money like we did with Ramsey Homes, not making a statement on a resolution that has no teeth to symbolize to the public that we’re doing something,” said Chapman, referring to the delayed and over-budget affordable housing development in Braddock.

Members voted 1-5 against Aguirre’s motion for a 1% cap, killing it, along with Seifeldein’s original 3% proposal. Seifeldein abstained from voting.

The resolution considered by the council last night notes that rent hikes pose a growing problem:

Prior to 2000, very few Alexandria landlords with properties of 10 or more rental units failed to comply with the City’s Voluntary Rent Guidelines. However, noncompliance increased significantly around 2,000, when the vacancy rate for rental properties in the city dropped below 1%, and again in 2005 when a large number of rental units were converted to condominiums and rents increased throughout the D.C. metropolitan area.

“It used to be be back the 80s they didn’t have all these software programs that would develop rents on a daily, sometimes hourly, basis,” said Seau. “Property management doesn’t have the ability to override the recommendation from whatever system they’re using.”

Seifeldein noted on the dais that he didn’t want to “dignify” the misrepresentations to his original 3% motion, but did want “loosely quote” Congresswoman Ayanna Pressley (MA-D) that “those closest to the pain should be making the decisions.”

The council ultimately voted 6-0 to approve the originally-proposed 5% rent cap, with Seifeldein abstaining.

Image via the City of Alexandria