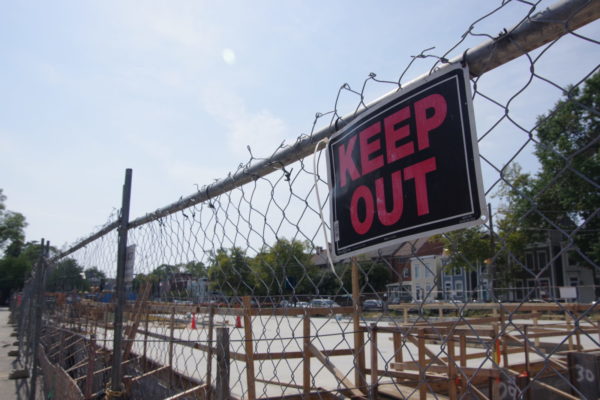 The redevelopment of the Ramsey Homes public housing project in the Braddock area is underway, but the housing agency developing the project has extended the timeline and is requesting further funding from the city.

The Ramsey Homes project, at the corner of N. Patrick and Wythe streets, consists of 52 affordable units financed with low-income housing tax credits, city loans, and public housing funds. Of those units, 37 are planned to be affordable to households making up to 60% of the area median income, while 15 will be classified as deeply affordable — available to households at 30% of the area median income.

The Alexandria Redevelopment and Housing Authority (ARHA) is requesting that the city loan for the project be increased from $3.6 million to $5 million. ARHA attributed much of the costs to problems caused by inclement weather.

Keith Pettigrew, CEO of ARHA, wrote the following, in part, in a letter to the Office of Housing.

As is the case with many construction projects in the city, the Ramsey Homes project has endured significant weather-related delays… During the pre-construction phase, execution of the archeological study was impacted by severe weather. The study commenced in July 2018 and had an original duration of 20 business days. However, due to 2018 being one of the wettest years on record locally, the archeological study was not completed until October 2018. In large part, the delay of the financial closing from July to November was a direct result of our inability to produce the required archeological study. To complete the study, our general contractor was onsite dewatering after each rainstorm and providing coordination of the excavation and related work. The unexpected costs associated with the four months of dewatering for archeology had not been accounted for in our pre-development budget.

The letter said the foundation of the new building was about 80% completed. The delays have resulted in ARHA extending the construction contract for the project to May 2020, with occupancy beginning in June 2020.

“ARHA believes that the project has achieved a phase of completion that is less risky, and the agency does not anticipate excessive costs going forward,” Helen McIlvaine, the city’s housing director, wrote in a memo.

This is not the first time ARHA has requested more funding for the project. The initial loan was increased from $2 million to 3.6 million last May. The project has been hit with regular delays and obstacles over the years and ARHA’s relationship with the city government has been frequently tempestuous. McIlvaine’s memo noted that “the ARHA team managing the project currently does not include any of the original staff who have transitioned out of the agency since the development was first approved and funded.”

The funding is planned to be extracted from the proceeds of a previous ARHA loan repayment. McIlvaine said in the memo that ARHA has told the city it intends to fully repay the loan when the project is refinanced after the affordability period, estimated to be 2035.