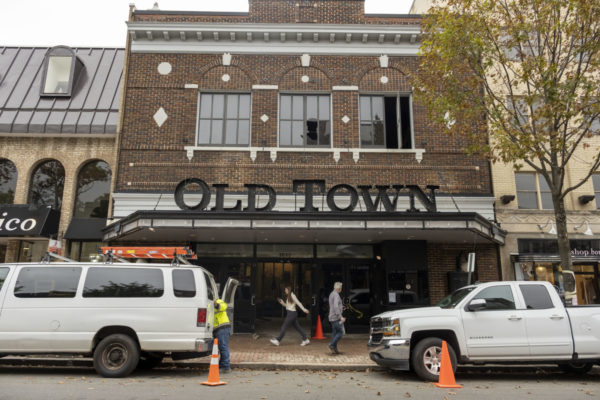 “We’re thrilled to be in Old Town, and we look forward to opening our doors in spring 2020,” Patagonia spokesperson Corley Kenna told ALXnow.

The outdoor clothing and gear company caters to adventurers of all sorts — from those looking for a casual fleece to others needing jackets to tackle subzero temperatures.

The nearest Patagonia store is currently in Georgetown, but some of the company’s offerings can be found in department and outdoors stores in the area, including Macy’s, REI, and Dick’s Sporting Goods.

The Old Town Theatre (518 King Street) first opened in 1914 as the “Richmond Theatre. It’s been vacant for more than three years.

Developer Asana Partners acquired the building in 2018, along with several other properties in Old Town. According to its website, the developer aims to bring commercial storefronts to Old Town with the goal of transforming the neighborhood into an “18-hour” community.

During its prime, Old Town Theatre served as the first permanent theater in Alexandria and screened silent movies. Throughout its century-long run, it closed and re-opened several times, before closing for good several years ago . Economic development officials say its reincarnation as a retail store will be a net positive for the community.

“The Old Town Theater is one of the most identifiable buildings along King Street, and has been out of commission for too many years,” said Stephanie Landrum, president and CEO with the Alexandria Economic Development Partnership.

“Today’s business model for successful film and live theater operations requires more space than exists, as a handful of previous operators will attest,” she said. “Asana and Patagonia are investing significant resources to preserve and reuse the building, and will create a memorable and very popular experience that will attract all types of shoppers.”