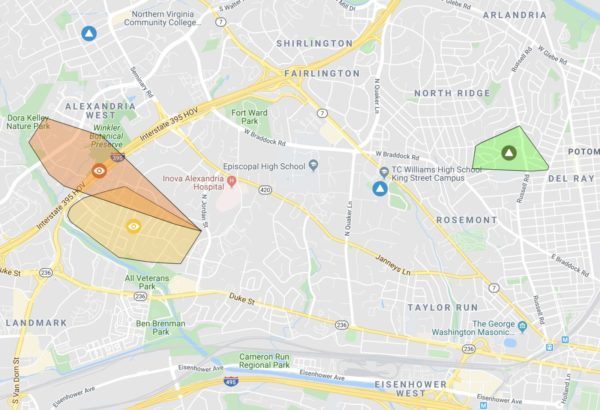 (Updated at 2:25 p.m.) Amid a Wind Advisory for the D.C. area, more than 2,600 Dominion customers are currently without power in Alexandria.

As of 1:30 p.m. Dominion reported 2,654 households and businesses without electricity in the city.

“Our @DominionEnergy crews are working to get the power back on!” a Dominion spokeswoman said via Twitter. “High winds bringing down trees & branches have caused many outages.”

The largest outage in Alexandria was just north of Holmes Run, near N. Van Dorn Street, where firefighters had earlier responded to a report of a small brush fire after an electrical transformer blew. Traffic signals were also said to be dark in the area.

Power should be restored in both areas by 7-9 p.m., according Dominion’s website.

Our @DominionEnergy crews are working to get the power back on! High winds bringing down trees & branches have caused many outages. In Northern Va., about 5,000 customers are out now mostly in these areas: Alexandria: 2,400, Woodbridge: 800, Herndon: 800, Leesburg: 200.

The outages are also prompting at least one school and two recreation center closures in the city.

10/17/2019 1:30 p.m. Campagna and Rec at William Ramsay Elementary School have been canceled today due to an ongoing power outage. Parents will need to collect their students from school or arrange for them to ride their usual bus home. Updates at: https://t.co/SmBx3a2R2z

Due to power outage today, Thurs., Oct. 17, William Ramsay & Chinquapin rec centers are closed and will reopen once power is restored. Today's Out of School Time afterschool program at William Ramsay has been cancelled. For class info, call 703.746.5594. https://t.co/CsrBnIeUcg.

The Wind Advisory is in effect until 6 p.m., with gusty winds expected to continue this afternoon.