A man was stabbed in the Braddock area on Friday night, adding to a number of violent incidents to occur in the area in recent days.

The incident took place around the 800 block of N Patrick Street, near the Braddock Road Metro station and the Alexandria Redevelopment and Housing Authority public housing units.

The victim is a white male who was stabbed in the upper body, ALXnow observed. No other suspect information was available. There were a number of witnesses and no one has yet been arrested.

There have also been two reports of gunshots in the area since July 9.

NOTIFICATION :: The Alexandria Police Department is investigating a felonious Assualt in the 800 block of North Patrick Street. Expect police activity in the area.

Two Alexandria men are in custody after a stabbing incident at Dora Kelley Nature Park in the West End on March 15 that left two victims in the hospital with serious injuries.

Police interviewed the victims on the evening of March 15 at Inova Alexandria Hospital. They admitted to meeting at the park at night to smoke marijuana with the suspects in a secluded wooded area. Once there, however, things took a dark turn.

“At this time, [one victim] saw a hand come across his face and felt his neck being cut. [He] then fled the park heading back towards his vehicle,” notes the affidavit.

The victim pushed away the knife, and was then stabbed in the back. The other victim was then allegedly pinned against a tree by both suspects and stabbed repeatedly. The victims escaped from the scene and were driven to the hospital by another friend.

Police located Guevara’s cell phone at the scene of the crime, and the suspects were positively identified by the victims in a police lineup. 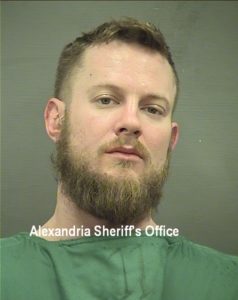 A 30-year-old Alexandria man was arrested on Christmas Eve and charged with stabbing his 38-year-old ex-boyfriend in the latter’s apartment at 3800 Executive Ave.

John Phillip Lambert was arrested and charged with malicious wounding after allegedly stabbing the victim in the left armpit with a pocketknife while giving him a bear hug.

Officers found three drunk individuals in the Arlandria-area apartment, according to a police documents.

“Once on scene, officers entered the apartment and discovered a male victim suffering from an apparent puncture wound to the upper body,” notes the police search warrant affidavit. “Officers… noticed an abundance of apparent blood throughout the apartment and observed what they believed to be a pocketknife on the floor of the bedroom.”

The victim, who was transported to George Washington University Hospital with non-life threatening injuries, said that he and Lambert were arguing and drinking.

“At one point, [the victim’s] former boyfriend grabbed him in a ‘bear hug’ and when he released him, they were both covered in blood and he had an injury under his left armpit,” notes the affidavit.

The officers arrived at the scene to find the victim, his roommate and Lambert “highly intoxicated.”