The Alexandria-Caen Sister City Committee is hoping to emerge from the other side of the pandemic reinvigorated and, in some ways, transformed.

The committee was established in 1991 and celebrates both the city’s ties with Caen, France, and French culture in general. It’s one of the more obscure ones, known primarily for the annual D-Day commemorative event, but committee member Elodie Guillon says there’s hope for that to change.

“Last year we did some events online,” Guillon said. “We definitely got more people who maybe would not have come to an event in person. We had a chef demonstrate [how to make] some French pastries — crepes and truffles — and we had about 80 people participating in that, which for us was nice. It was our biggest event so far.”

The committee is hosting another online event on Thursday, Sept. 16. The meet-up will be to discuss Le Chant du loup, a French action film available on Netflix. Guillon said the cocktail discussion will likely center around depictions of the French and a general discussion of the state of the French film industry.

But Guillon said the committee members are also excited to get back to in-person activities, and are hoping to gradually work public engagement to the levels of some of the online events during the pandemic.

“Now we’re trying to get back into doing more face-to-face events,” Guillon said. “We have one event lined up for Tuesday, Sept. 18. It’s a ‘soup and sketch’ event. It’s going to be in-person but small, only about 20 people max. A drawing instructor from the Smithsonian will be there to teach people to draw.”

Guillon said the committee is hoping to broaden the circle of people who participate in its events.

“I have a lot of my students in Alexandria and they are all big Francophiles and never heard of the committee,” Guillon said. “It’s an opportunity to build awareness around the community. People know it form D-Day celebration, but there are other things to promote French culture in Alexandria. It’s always the same type of people coming, and it would be nice to increase participation, especially with a younger audience.”

Meanwhile, for her own program, Guillon is working on putting together a trip to France in October.

“It’s a group of 12 people,” Guillon said. “I’m very excited, but it’s a lot of pre-work because we have to deal with the health pass in France and I have to translate all the vaccination passes to go to restaurants. It’s a lot of work to do ahead of time, but everybody is excited. I’m hoping we’ll be able to go. Right now we’re supposed to go unless France closes their borders.” 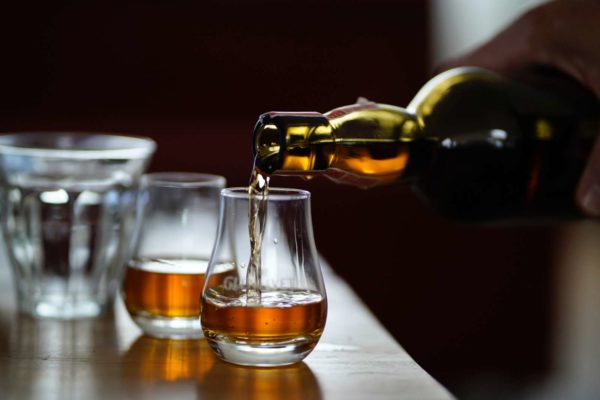 Earlier: Alexandria loves to celebrate its Scottish heritage. The latest such celebration is taking place later this month.

“This annual fundraiser supports Alexandria Sister Cities Committee’s cultural and educational activities with Dundee, Scotland and Helsingborg, Sweden,” the event webpage says. “This festive and fun event is for a great cause and always sells out. Get your tickets now.”

We Alexandrians love to celebrate our City’s Scottish roots and our First President George Washington. The Annual Sister Cities Whisky Tasting is the perfect event to do both! The Alexandria Sister Cities Committee, with assistance from the Office of Historic Alexandria (OHA), is hosting this year’s whisky tasting event on March 20, from 7-10 pm, at Gadsby’s Tavern Museum, 138 North Royal Street, in the very room where President George Washington held his birthday ball in 1789. George Washington, a distillery owner and whisky lover, will be there “in spirit” taking the Angel’s share alongside guests.

According to Sister Cities Committee Member and Whisky Tasting Event Chair Dana Linnet, “This is a festive and casual occasion where guests can unwind at one of Alexandria’s best parties and something out of the ordinary, different from other whisky tasting events. It could be date night, ladies’ night, lads’ night, or just a great night out with fun people from Alexandria, DC, Arlington and Fairfax, and sometimes Scotland! It’s a colorful, fun affair, so we encourage everyone to wear their kilts and tartans!”

The event features a full 45-minute VIP whisky tasting experience conducted by North American Whisky Ambassador Simon Broking and Beam Suntory’s “Protector of the Peat” Palmer Orlandi. Guests will receive a swag bag and their very own official Sister Cities Scotch glass, perfect for that nice pour of Laphroiag. Scottish fiddle and bagpipe entertainment will be provided by renowned musician, Peter Walker, thanks to sponsorship by the St. Andrew’s Society of Washington, DC., along with a fabulous dinner catered by Tasteful Affairs (to include non-meat options for Lent and vegetarians), wine selection, beautiful desserts by Pop-Up Patisserie and more. Non-alcoholic drinks will also be served. Linnet stressed that the Committee encourages party-goers to drink responsibly and arrange taxi, ride share, or designated driver transport to keep Alexandria and guests safe.

“We are truly fortunate to be able to keep the quality of the event high and the ticket price reasonable thanks to so many incredible sponsors who show up and show their strong support for our community. We couldn’t do it without their generosity,” Linnet added. Not to rest on their laurels from previous years, this one will be a “notch above.” The event will close with a raffle featuring a golf and lunch outing at the Army Navy Country Club, jewelry, a pedicure, tours, and other prizes. The proceeds of the event ticket and raffle will be used for scholarships for local students to participate in an educational program in Dundee this fall.

“We are so fortunate to have the support of our local businesses, OHA, and City Council,” Linnet says. It will be a great party that will bring everyone together. Tickets can be found on Eventbrite. Slainte!