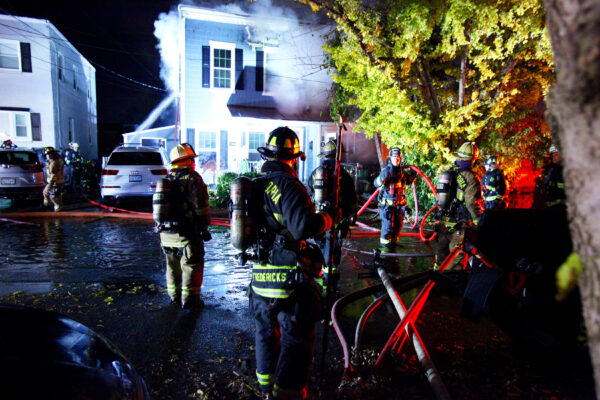 Alexandria firefighters say the city and its mutual aid partners in neighboring jurisdictions were left unprepared in the event of an emergency last week, but the Alexandria Fire Department says everything was covered.

In a tweet on July 7 (Thursday), the International Association of Firefighters Union 2141 issued a public safety announcement that the city had only two fire trucks and no rescue apparatus in operation.

The union also says that the city is gambling with the lives of its residents by depending too often on its mutual aid partners in neighboring jurisdictions — the Arlington, Fairfax and Prince George’s County Fire Departments.

AFD confirmed that on July 6 (Wednesday), a heavy rescue squad vehicle went out of service for a day-and-a-half and was replaced during that time by a reserve vehicle. The following day, July 7, a ladder truck went out of service for repair and was briefly replaced by a spare engine sitting in Old Town’s Station 201, which has been closed for floor repairs.

**Public Safety Announcement**
Currently Alexandria only has 2 trucks and 0 rescue apparatus in operation in the ENTIRE City – with none in the entire eastern half of the city.

The safety of the public and our members shouldn't be put uneccesarily at risk.

The Alexandria Fire Department maintains state-of-the-art frontline and reserve apparatus fleet. These apparatus are specialized vehicles that can require repair from time to time. On July 6th, a heavy rescue squad vehicle required a repair that was completed in a day and a half and then was back in service. During this time, another reserve vehicle was placed into service. A ladder truck went out of service for repair on July 7th and was back in service on the same day. During that time a reserve vehicle was placed into service until the ladder truck was repaired. At no time was there a safety risk to our residents or city personnel.

The department uses National Fire Protection Association Standards to meet service demands. Regionally, we also share automatic and mutual aid capabilities to maintain public safety within the region, in which various jurisdictions rely on each other for calls for service. The department continues to evaluate the growth of the city and make deployment adjustments to address the community’s needs.

One Alexandria firefighter who works in operations, and did not want their name posted out of fear of retaliation, said that the heavy rescue squad vehicle was replaced by an empty reserve engine, which only had fire hoses on it.

“A truck broke down and we didn’t have a current reserve truck,” the firefighter said. “That truck company was actually put onto an engine. You can’t swap ladders and all the bigger tools and chainsaws onto an engine, because there’s not the space for it.”

The firefighter continued, “They were capable of running certain calls, like they were able to reset fire alarms, they were able to run EMS calls because they had their EMS equipment with them. But they weren’t able to act as a truck, they weren’t able to ladder a building — other than one 24-foot ladder and the 14-foot ladder that comes on the side of engines. They weren’t able to operate as a truck company. Luckily for the rescue, we had an engine, because we have Station 201 that’s currently out of service, and the engine is fully stocked, sitting there and waiting to be used for when that station goes back in service.”

Mayor Justin Wilson spoke with AFD after the tweet was posted, and said that the Department “didn’t miss a beat.”

“My understanding in talking to AFD last week is that this related to a mechanical issue with two separate pieces of apparatus that were quickly repaired, and that they had backup apparatus available to ensure we didn’t miss a beat,” Wilson told ALXnow.

Union organizer Jeremy McClayton says that the public doesn’t know the difference in the fire department’s jargon — between a truck or an engine.

“Tell someone who lives in a high-rise that an engine and truck are the same,” McClayton said. “The truck, using the truck ladder, can get up to the tenth floor in the event of a high-rise rescue or fire, while an engine can go up two stories. Same thing with engines and the rescue – the rescue apparatus has the vehicular extraction on it (jaws of life). An engine can’t hold that, so replacing a rescue with an engine means we don’t have the same response capabilities.”

In the meantime, the City Attorney’s Office and the union are hammering out the rules of their collective bargaining negotiations. The union frequently tweets about firefighters working too many hours of forced overtime, equipment failure and more.

THE COUNT – The City of Alexandria has now had at least one unit in the fire department out of service every day for ELEVEN MONTHS STRAIGHT!

On August 12th, we'll hit a full year of providing less service to the City of Alexandria due to short staffing.

Firefighter Megan Ellzy, a former IAFF Local 2141 president, has been with the department 12 years, and says that the city is playing a dangerous game.

“We’re really hoping that (new City Manager Jim) Parajon comes in with his planning background and that he kind of has some forethought and encourages our department to be proactive and preventative, versus waiting until a catastrophe happens,” Ellzy said. “And you know that whole ‘thoughts and prayers thing,’ right? Our leaders are gonna take pictures with us and come to the funerals and all, but it could have all been avoided.”