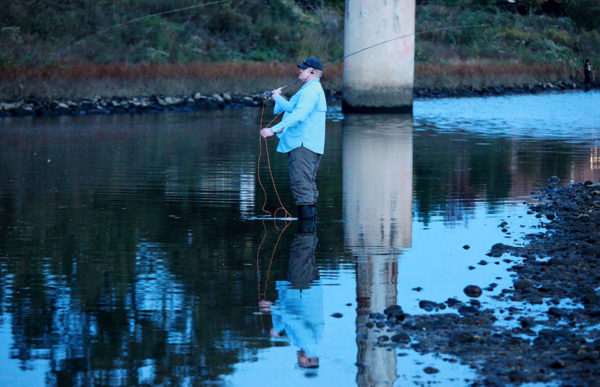 Beyer Calls Trump ‘Menace’ After President Denounces Fauci on Twitter — “Donald Trump publicly attacks one of the country’s leading medical experts with juvenile personal insults as COVID-19 cases, hospitalizations, and deaths spike across the United States. Trump is a menace to the health and safety of the American people.” [Twitter]

City Recommends Low Risk Halloween Activities — “The City and AHD strongly urge Alexandrians to choose Halloween activities that are identified as lower risk by the @CDCgov. Treat yourself to lower risk options this year and reduce the likelihood of COVID-19 outbreaks.” [City of Alexandria]

ACPS Gives Away 1,000 Books to Patrick Henry Elementary School — “Thanks to grant from the Reading Is Fundamental program, staff presented students in kindergarten through the fifth grade with 1,000 free books!” [Zebra] 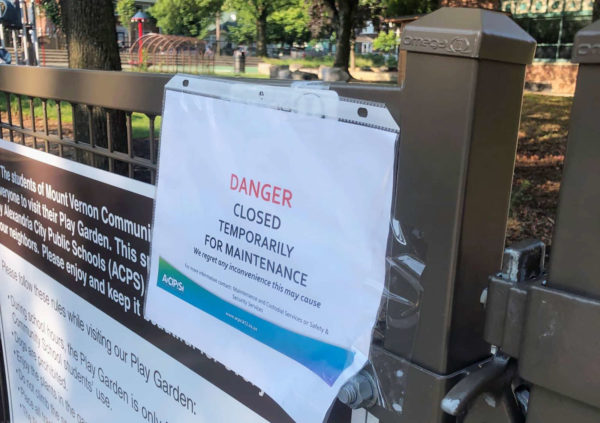 With summer officially in full swing, Alexandria City Public Schools is working to reopen its playgrounds to the public.

“All other playgrounds will remain closed for the time being to complete necessary repairs to ensure the safety of playground visitors,” Helen Lloyd, ACPS director of communications, wrote to parents. “Repairs are anticipated to begin early next week and affected playgrounds will reopen once deemed safe to do so.”

One parent who spoke anonymously was miffed that the playground at Mount Vernon Community School was closed.

“Closed for maintenance?” the parent said. “Seriously? Couldn’t that have been done while everything was closed?”

Playgrounds will be considered open only if and when their gates are unlocked and signs are erected telling folks that restrictions have been lifted.

Lloyd told ALXnow that the coronavirus has slowed down operations, and that as playgrounds are being cleaned and renovated, there is no timeline which playgrounds will open and when.

“We understand families really want to be on the playgrounds,” Lloyd said. “We’re working as quickly as possible to make that happen.” 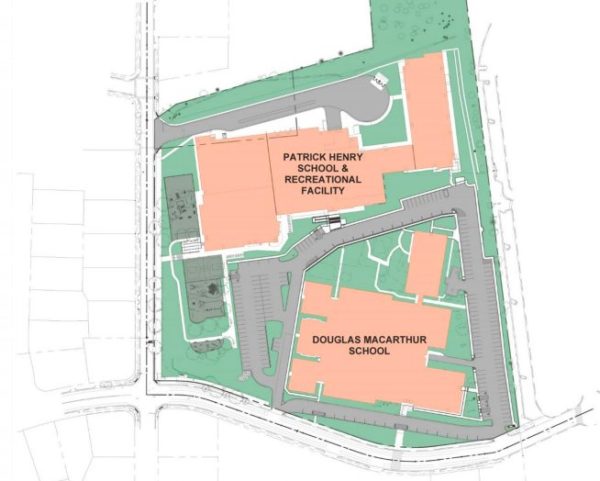 The plans have controversial in the past, with some nearby residents expressing concerns about the new levels of traffic the schools would bring to the nearby two-lane Latham Street, and Peacock and Polk Avenues.

“It was adversarial before the vote, but after everyone has shown up to these meetings trying to find solutions and figure out how best to make this work,” staff said at a meeting last Thursday. “I think it’s been helpful and a lot of that collaboration is happening.”

The project will include staggered start times for the two schools, with the Douglas MacArthur School opening and closing a half-hour after Patrick Henry Elementary to safely allow bus traffic from one school to exit before the other arrives. ACPS currently faces a bus driver shortage, as noted by almost daily warnings on the school system’s website, staff said the schools will ultimately have to look for additional contractors.

School staff also recommended a two-way circulation system at the school’s single, central loop. Parents dropping off or picking up children at Patrick Henry would travel counter-clockwise at the outer level of the circle while pick-up or drop-off for Douglas MacArthur would run clockwise at the inner ring of the circle.

Approval for the use of the existing Patrick Henry facility as swing space, while construction is underway on the new facility, is scheduled to go before the City Council for approval next month. The Douglas MacArthur design kickoff meeting is planned for tomorrow (Tuesday) at 6 p.m. at Douglas MacArthur Elementary School (1101 Janneys Lane).