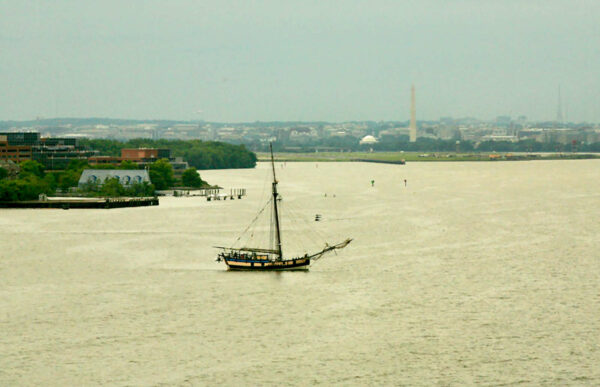 Amazon and Metro announce $125M plan to make 1,000 affordable housing units near Metro stations — “This represents another return on the region’s extraordinary investment in mass transit, as the partnership with Amazon will accelerate transit-oriented development, grow ridership, and keep our region competitive with other global economic centers,” said Metro Board Chair Paul Smedberg. “Amazon is stepping up to the plate with an unprecedented commitment to affordable housing in the National Capital Region.” [WMATA]

New job: Bartender/Server/Runner — “The Old Dominion Boat Club is looking to hire servers, bartenders, and food runners. We have competitive pay and participate in a very healthy and robust tip share.” [Indeed]

The Old Dominion Boat Club (ODBC) will present the Alexandria Planning Commission in November (Nov. 5) with a plan to build a floating wharf and pier outside its clubhouse at 0 Prince Street.

“The floating pier will provide facilities for transient boat mooring for larger boats due to the water depth along its expanse and for rowing crew shells and chase boats either for planned events/regattas or emergency needs,” according to an application for the special use permit.

The application continues, “The ODBC also proposes to add a floating wharf over the shallow water in its riparian rights to allow and support current and new uses that include small boat mooring and launch and retrieval of crew shells and kayaks to support increased recreational use of the Potomac River.”

The total square footage for the project is 2,688 square feet, and the club noted in its application that it will remove the floating structures if the city needs the space for flood mitigation infrastructure improvements.

“The proposed new floating wharf at the site would encourage increased recreation use of the site and support ODBC water dependent uses,” notes the application.

The city issued a certificate of occupancy for the ODBC Clubhouse at 0 Prince Street in 2017. The club was previously located at the foot of King Street. That property was exchanged with the city for a number of nearby lots downriver in order to build a public walkway and make flood mitigation improvements.

The Old Dominion Boat Club’s (ODBC) plans to reform the waterfront portion of its Old Town headquarters last fall, but after being lost at sea amid the COVID-19 pandemic, the plans are finally headed back to harbor at the Planning Commission in September.

The ODBC has used its various waterfront headquarters since 1880 as launching points for aquatic activities. The pier outside the current location — which the ODBC was more-or-less forced into in 2014 under threat of eminent domain — is a ramshackle bundle of pillars that only vaguely resembles the L-shaped pier that local commercial vessel The Dandy was docked at for a number of years.

The ODBC plan is to replace this pier with a combination fixed pier jutting eastward and a floating pier extending south. Smaller transient boats will be moored at the floating pier while the larger ships will be docked on the opposite side of the new pier.

The new dock would also keep less debris trapped along the shoreline — a frequent problem along Alexandria’s waterfront.

“The proposed new floating wharf at the site would encourage increased recreation use of the site and support ODBC water-dependent uses,” the ODBC said in its application. “The Prince Street site will be configured to support transient boat mooring and other daily marine uses.”

While the new pier would be private, the ODBC offers the use of its facilities for activities like programs for children with special needs and Christmas events that would benefit from the new pier. 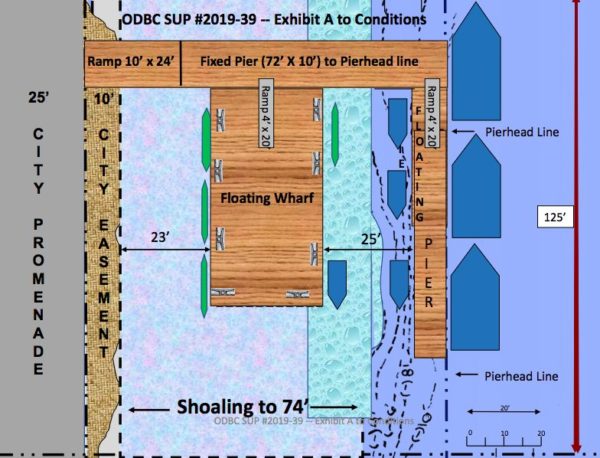 A plan to replace a disused pier would help the Old Dominion Boat Club bring more boats to Alexandria and hopefully make the waterfront a little cleaner.

In plans submitted to the City of Alexandria, the boat club in Old Town laid out its vision for replacing an outdated and disused wharf just to the south of the club’s location on The Strand with a new pier and floating dock.

The current pier is a fixed, L-shape, but hasn’t been used for mooring since the Boat Club moved to its present location. According to the application, the boat club plans to replace the existing pier with a combination of fixed piers extending eastward and a floating pier to the south.

Additionally, the boat club said the current pier is too low in the water and its fixed nature means that organic material and trash are blocked in and collected near the river’s edge. The new fixed pier would be higher than the other, allowing refuse to be flushed away from the waterfront.

Other measures in the application would involve removing old and unused piles in the water that currently slow the water and keep debris trapped up at the river’s edge.

The floating pier will provide facilities for transient boat mooring for larger boats due to the water depth along its expanse and for rowing crew shells and chase boats either for planned events/regattas or emergency needs. The ODBC also proposes to add a floating wharf over the shallow water in its riparian rights to allow and support current and new uses that include small boat mooring and launch and retrieval of crew shells and kayaks to support increased recreational use of the Potomac River.

Alexandria’s Old Dominion Boat Club was founded in 1880 and has relocated three times throughout its life, most recently to the foot of Prince Street after the city threatened eminent domain to take the building they had been located in since 1924 — currently Waterfront Park.

The application notes that the new wharf would encourage recreational waterfront use at the pier while the main Prince Street location would support transient boat mooring and daily marine uses.

The item was scheduled to be voted on at a Planning Commission meeting tonight (Tuesday) but has been deferred. 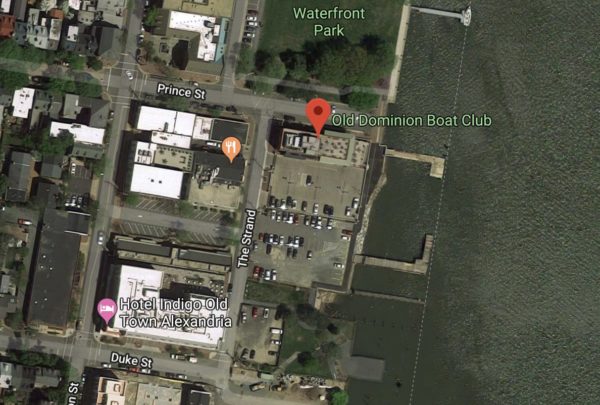 Photo (top) via City of Alexandria, (bottom) via Google Maps