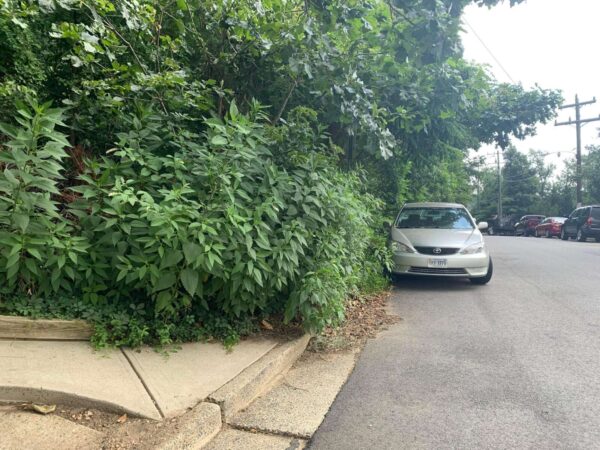 After months of back and forth, Alexandria’s City Council ultimately rejected an appeal from neighbors to keep a sidewalk from being built on Polk Avenue at the western edge of Seminary Hill.

The north side of Polk Avenue directly abuts Polk Park with no sidewalk, meaning anyone walking along the north side of the street is forced to cross the street — without a crosswalk at the western end. But the proposed sidewalk would also involve eliminating nine parking spaces neighbors say are desperately needed and would slightly cut into Polk Park.

Kathy Burns, who lives close to the sidewalk, said that there was no recorded history of any pedestrian, child or otherwise, being struck by a car in the area in question. Burns said the main concerns from neighbors were both the loss of nine parking spaces and concerns that there was no clear, evidenced-based reason presented by Transportation and Environmental Services (TES) that the sidewalk was needed.

Many of the speakers were neighbors expressing opposition to the city’s plans, though others were in support — like one who said she lived in townhouses overlooking the site, who said she was in favor of the sidewalk and hoped her two-year-old daughter could eventually use it to walk to Polk Elementary School.

Mike Doyle, founder of Alexandria Families For Safe Streets, said his group supported the installation of the sidewalk.

“We understand the challenge of parking,” Doyle said. “We’re not engineers, but we do know speed kills and speed maims.”

Doyle offered a middle way that some on the dais expressed an interest in: adding the sidewalk but converting one of the travel lanes into a parking lane and making Polk Avenue a one-way street. City Council member Amy Jackson asked staff whether this was a possible alternative.

“I hesitate to offer an assessment; we have not considered turning that street one way,” said Yon Lambert, the director of the Department of TES. “Typically there is an alternative for one-way traffic… There are one-way streets in some neighborhoods, but studying that would cost more.”

Ultimately, Mayor Justin Wilson said he would likely always side with building a sidewalk.

“I appreciate the input of residents on both sides of the issue,” Wilson said. “Honestly, this is pretty basic for me: I believe every street in the city should have a sidewalk on both sides. Full stop. Period. I don’t believe that’s a debatable question in my mind. That’s just a basic component of the road. We don’t question other components of roads and I don’t think we should question that there should be a sidewalk on both sites.”