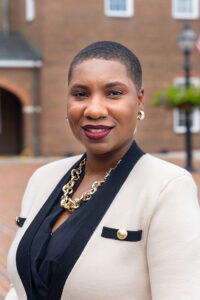 City Manager Jim Parajon has announced that a former Norfolk reporter and fellow transplant from Texas will be coming to Alexandria to serve as the city’s director of communications and public information.

In a release, Parajon said Ebony Fleming will serve in the role effective today (Tuesday).

While Fleming is relocating from Texas, as Parajon did when he was hired in December 2021, Fleming’s career started in Virginia.

“Fleming’s early career started in broadcast news at WTKR NewsChannel 3 in Norfolk, VA while earning her bachelor’s of journalism from Norfolk State University,” the city release said. “She held several positions during her tenure, including producing the #1 midday newscast reaching approximately 1.7 million viewers.”

Fleming earned a master’s of public policy from the University of Houston and served as the public information officer with the Harris County District Attorney’s Office.

“Prior to joining the City, Fleming served as the Director of Communications for BakerRipley, the Houston region’s largest social services nonprofit which serves more than half a million residents annually,” the release said. “During her tenure, she led strategic communications for the nationally recognized organization, including its launch of the COVID-19 rental assistance program.”

The release said that Fleming will oversee the city’s strategic communications plan and the expansion of Alexandria’s Language Access Program.