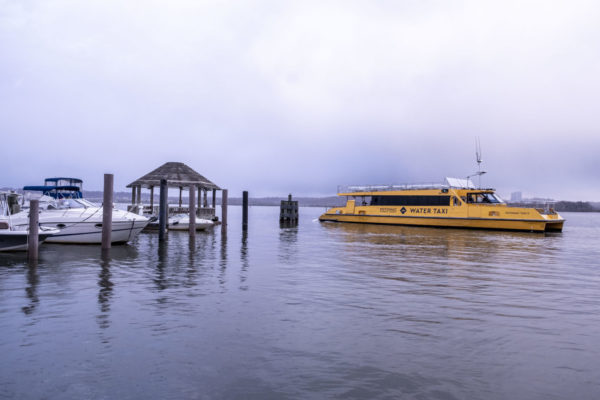 While buses and trains are centerstage in efforts to replace Metro during an extended closure planned through earlier next year, Alexandria is also looking to bicycles and boats to help make up the difference.

Alexandria will be cut off from the rest of the Metro system from Sept. 10 to Oct. 22 as WMATA works to bring the Potomac Yard Metro station in line with the rest of the system. Then, from September through spring 2023, the Yellow Line Tunnel connecting Pentagon and L’Enfant Plaza stations will be closed for repairs, forcing Alexandria commuters to loop up into D.C. through the Blue Line.

In a meeting of the Potomac Yard Metrorail Implementation Work Group on Monday, Thomas Hamed, an urban planner with the Department of Transportation and Environmental Services (T&ES), outlined some of the other methods the city is looking at to get commuters back and forth between Alexandria and D.C.

The offer resembles bike share deals from previous Metro shutdowns, though Capital Bikeshare has been significantly expanding the number of bicycle docking stations around Alexandria.

Another commuter option used previously is the Potomac Water Taxi, which runs from the Old Town waterfront up to Georgetown and The Wharf or down to National Harbor. The Potomac Water Taxi is a private service, but Hamed said the City of Alexandria is working on partnering with them for increased service.

“We will be adding water taxi boats earlier in the morning,” Hamed said. “Right now, it’s a private service that starts later in the day and is geared mostly toward visitors to and from Alexandria. It’s not really practical for commuters. We partnered with them in 2019 to add boats [earlier in the morning] and we will be doing that again. We are working with the operator of the water taxi to throw in a little extra incentive.”

Someone in the room quipped that the incentive might be life jackets, but others suggested various types of alcoholic drinks might be an added boon.

One of the other Metro replacements planned is VRE, which will offer free rides throughout September throughout its system. A VRE representative at the meeting said the train will be free in October as well, but only for the Alexandria-Crystal City to L’Enfant section of the line.

END_OF_DOCUMENT_TOKEN_TO_BE_REPLACED

More Stories
Ask McEnearney: How can I increase my home’s value before I put it on the market?WMATA vows to learn from past mistakes as Potomac Yard Metro station nears completion