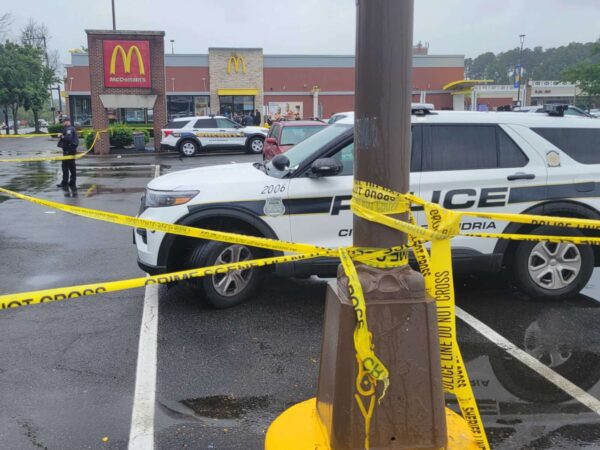 Alexandria will start interviewing candidates next month to independently review allegations of police misconduct, according to City Manager Jim Parajon.

It’s also been nearly a year since Council’s order to form the group went into effect — on July 1, 2021.

The Board is unable to function properly, however, without hiring an independent auditor/investigator to hire staff, conduct investigations and coordinate the Board’s administrative functions.

“We will be conducting interviews for prospective candidates later in July,” City Manager Jim Parajon told ALXnow. “This is an important and somewhat unique position, and our search firm has been seeking the best candidates for the past couple months and now we are moving to the next phase which is the interview process.”

Additionally, the Board is not posting videos of its public meetings, although the City ordinance establishing it states: “All public meetings of the Board shall be videotaped and made available to the public on the City’s website.”

The Board was approved by Council in response to social unrest from the May 2020 murder of George Floyd at the hands of the Minneapolis police. After the murder, former Alexandra Police Chief Mike Brown and APD officers participated in protests around the city calling for racial accountability in policing.

The creation of the board also received pushback from police during the approval process.

A June 22 meeting establishing the bylaws for the group was canceled, and the next Board meeting is at 7 p.m. on Wednesday, July 6, in City Hall’s Sister City Conference Room.

The full job posting for the position is below the jump.

In June 2020, the Alexandria City Council adopted Resolution 2950, which condemned police brutality and systemic racism, reaffirmed that Black Lives Matter, and stated Council’s intent to establish a community policing review board in Alexandria.

In April 2021, the Alexandria City Council adopted an enabling ordinance for a Community Policing Review Board (CPRB), to serve a community committed to racial justice and equitable policing. The CPRB is being organized concurrent with the hiring of the Independent Policing Auditor and, with the support of the Auditor, will enhance policing legitimacy and increase and maintain trust between and among the Police Department, City Council, City Manager, and the public.

The CPRB will: provide timely, fair and objective review, investigation and evaluation of policing policies, practices, procedures, and outcomes in Alexandria; provide meaningful assessments and corrective recommendations intended to remedy discriminatory practices, including racial and social inequities, that it may find; ensure the protection of all communities through recommended actions and reform, including in the criminal justice system; and recommend strategies for effectively implementing these reforms in our community.

The CPRB will have investigative authority, including subpoena power, and is charged with receiving and investigating complaints from the community regarding policing in Alexandria; reviewing Alexandria Police Department investigation of certain incidents and complaints; conducting independent investigations of more serious incidents, specifically incidents resulting in death, use of force incidents, and severe misconduct; and considering and making recommendations on policing practices, policies, and procedures.

This new, high-visibility position is characterized by the Independent Policing Auditor’s ability to provide fair and objective oversight and implementation of the work of the Community Policing Review Board, establish and build credibility among diverse audiences, and enhance transparency and instill public confidence in the policing review system and processes. The responsibilities of the Independent Policing Auditor are broad in scope and require the highest degree of professional, independent judgment, personal integrity, and accountability. The auditor performs work that is highly complex, and often involves issues that are sensitive and confidential.

The Independent Policing Auditor is charged with fulfilling the purpose and scope of the CPRB by providing functional support to the new CPRB in its aim to implement objective and independent civilian-led oversight of policing in the City of Alexandria. The Auditor will be responsible for the independent review of APD’s current and proposed policing practices, rules, policies, procedures, directives, and outcomes; performing a quality assurance function with the goal of identifying systematic changes that will improve police services to the community; examining systemic patterns in complaints, incidents, conduct, policies, procedures, and outcomes in policing in Alexandria; and conducting independent investigations of incidents as authorized by the ordinance.

The Auditor will work with the CPRB to enhance transparency and trust, to promote fair and effective policing, and to protect the civil and constitutional rights of citizens, including marginalized groups and those disproportionately affected by policing in Alexandria. This position is appointed by the seven-member Alexandria City Council and reports directly to Council.

Duties may include, but are not limited to, the following:

Candidates should have a bachelor’s degree from an accredited college or university, preferably in a field related to public administration, police oversight, criminal justice, or law. This includes degrees in social work, conflict resolution, translational leadership, restorative justice, or other disciplines relevant to civilian oversight. A Master’s Degree or Juris Doctorate is highly preferred.

Minimum of five (5) years of progressively responsible experience in fields related to criminal justice, social justice, or public administration or in the practice of law, preferably in the public sector. Experience in mediation, restorative justice, or other alternatives to adversarial proceedings is desirable. Experience in civil, criminal, or factual investigations which involve the gathering, analyzing, and evaluating of evidence is also desirable.

The applicant should possess demonstrated leadership ability, and have a reputation for fairness, integrity, and responsibility. He or she should have the ability to work collaboratively with the CPRB, City Council, City Manager, Police Chief, City Attorney, Commonwealth’s Attorney, and others, addressing conflicts with tact and diplomacy in the face of conflicting priorities and differing opinions. We seek a person who is willing to engage in proactive discussion with all segments of an active citizenry and highly participative community and who has the ability to bridge community and institutional concerns around issues related to transparency, equity and justice.

The applicant should have knowledge of:

The applicant should have knowledge of and demonstrated experience with investigative techniques and procedures. They should have the ability to:

The applicant should have knowledge of methods and techniques of research, policy review, data analysis and evaluation, as well as principles and practices of public information and community relations. They should have the ability to:

The City of Alexandria has partnered with POLIHIRE to lead the search for the  Independent Policing Auditor. To apply, please send a resume and cover letter outlining your relevant experience to: [email protected] Please only include your (Last name, First name) in the subject line.