Two years after plans to convert 116 South Henry Street into an automated parking garage first went to city review, the garage is going to the Board of Architectural Review again on Thursday (May 5) with some changes in mind.

The plan remains to build a 50-foot garage just off King Street, but the entrance is going through something of a redesign after the earlier designs were considered too “monolithic” at earlier hearings. 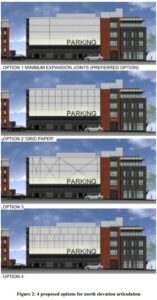 “The lower levels of the garage will be clad in black brick and the levels above will be clad in EIFS/Dryvit synthetic stucco,” the staff report said. “Entries on the first level will consist of two overhead rolling garage doors, an aluminum and glass storefront door system, and two pedestrian doors. Large backlit letters spelling ‘PARKING’ will be at the west end of the north elevation, above the entrances.”

The report comes with some potential changes to the visuals of the front of the building along with options for different lighting, though to the untrained eye they all still pretty much look the same.

Construction was approved in April for the three buildings on the site. The parking structure will be neighbored by a four-story residential building and a four-story mixed-use building.

Staff is recommending approval of the parking garage design, with a preference expressed for the fourth option.