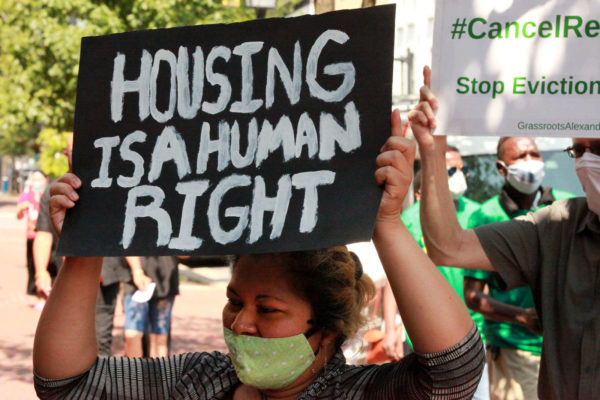 A recent Agenda Alexandria meeting with some of the city’s leading affordable housing advocates provided a deep dive into some of the unique challenges and opportunities in the field locally.

In particular, the panel looked at how addressing the affordable housing crisis in Alexandria has changed since the pandemic started.

Mary Lee Anderson, executive director of Senior Services of Alexandria, said for a year after the pandemic started that many of those on the panel would meet weekly and discuss ongoing affordable housing issues. Anderson said strong support from other non-profits and from the City of Alexandria helped maintain services like food delivery at levels above what neighbors were providing.

“We deliver two meals every day, one hot and one cold, where Arlington and Fairfax went to delivering frozen meals once a week,” Anderson said. “The only way we were able to continue doing that was because of the funding from the city and because [Deputy City Manager] Debra Collins the first week was having a City Council meeting and said ‘We’re not going to furlough any city employees and if any nonprofits need help let me know,’ and I was immediately typing ‘Debra, we need help.'”

Anderson said the pandemic forced Senior Services to lose 3/4 of their volunteers overnight, with many in city staff stepping up to fill that gap.

“Because of the influx of need with individuals who can’t pay the rent going to court, we’ve had to shift how we address these problems,” Horner said. “How are we going to actually provide assistance to so many people who have such a great level of need? It’s required a greater level of collaboration. I’m still representing clients but had to shift from a micro-focus to a macro-focus. How are we going to talk to as many people as possible? That’s one of the things we’ve really focused on, shifting the model from micro to macro.”

Added to those issues, Horner said, is the Virginia Rent Relief Program’s May 15 expiration date.

“We only have about three more weeks of this safety net before we have to turn back to local funds,” Horner said.

Horner said one of the difficult parts of the job is telling locals that there may be no choice but to leave Alexandria.

“At a certain point, when you’ve run out of rental assistance, an eviction might happen,” Horner said. “How do you afford to live here? When there is no answer there, the answer is you don’t live here anymore. I don’t like to give that practical advice, I would like to avoid it, but it comes up quite often because there’s not enough affordable housing.”

The other outcome Horner sees is families doubling up on into cramped units to keep their children in Alexandria’s school system.

“They end up living with another family and that’s when you see ten people in a two-unit building in Alexandria,” Horner said.

Horner said three areas, Arlandria/Chirilagua, Southern Towers, and the Landmark neighborhood account for most of the places where her offices is seeing the most need for eviction assistance.

For those who have been evicted. Allison Coleman, director of the Office of Community Services at the Department of Community and Human Services, said her office has been working to help get those kicked out of their homes get local storage for their belongings.

“One of the initiatives in eviction prevention is being able to work with a local moving and storage company to help those at risk of eviction,” Coleman said. “[That means] having access to a storage unit until they have a new affordable housing unit and having people to help them move in. That’s just one effort to be able to support them.”

The affordable housing advocates also said it was important to note that landlords aren’t always cartoonish villains in eviction stories and some have been at the table and been helpful.

“I think it’s important to note too that never were the landlords made out to be the bad guys in this whole scenario,” said Melanie Gray, director of Outreach and Mission at Historic Christ Church. “There was an effort to bring them to the table from the very beginning and recognize that they have needs too. They have financial responsibilities.”

Horner said one of the advantages in handling eviction cases in Alexandria is that the majority of landlords are large-scale property owners who can afford to take temporary revenue hits that smaller landlords can’t.

“One of the benefits of state rental assistance is that it’s a benefit for landlords and tenants, which is a very rare thing to find in eviction prevention: something that we can all agree on,” Horner said. “I don’t want to say it’s been easy, but it’s been an easier job getting landlords on board with this… We don’t have as many private landlords here. The majority of the landlords seeking rental assistance are large-scale landlords who aren’t as close to missing mortgage deadlines. We do have a few, but that’s one of the thins that’s made things easier here. We have these large landlords that can wait a little bit longer to get more money.”

In terms of long-term fixes, some of those on the panel said solving the affordable housing issues are inseparable from increasing density.

The full discussion is available below: