Captain Mike Faber feels like he’s always working, and that the City of Alexandria owns he and his family.

Faber says he works an average of 80 hours a week, much of it forced overtime, and on Saturday (April 23) he was backed at City Hall by nearly a dozen Alexandria Fire Department staffers and supporters pleading for increased wages and upgraded equipment.

“In a sense, the City of Alexandria doesn’t just employ me, it owns me and my family, because my ability to participate in my home life is controlled by my employer,” Faber told City Council. “Even with mandatory overtime becoming a daily occurrence, we are still putting trucks, engines and ambulances out of service. As of today, we’ve had something out of service every day since August 12, sometimes having up to four or five units downgraded or pulled from service. That’s 254 straight days of providing suboptimal, and unnecessarily hazardous service to the members of our community.”

Josh Turner, president of the International Association of Fire Fighters Local 2141, said that there is a culture of “employees being stepped on, mistreated, and lied to.”

“That 10% increase would only cost $3.4 million,” Turner asked. “What happened to this promise and support?”

We have about a dozen members at Council today to push Alexandria to fully fund our fire department!

Stop understaffing our department – when you do, YOU CHOOSE to keep us from our families!! pic.twitter.com/FxSbXuCYBE

Mayor Justin Wilson said that there are no quick fixes to the department’s woes.

“It requires that we not only attract and train new staff, but also retain folks at higher rates than we have been,” Wilson told ALXnow. “We have added significant headcount in recent years (there is no major City Department that has grown as much as AFD), but it takes a while to staff up that quickly, given the training required. That being said, I would like us to continue to explore ways for us to recruit staff from around the region that are already trained and can be placed on the street more quickly than new recruits. That will enable us to reduce the overtime challenges that are negatively impacting our staff.”

AFD was challenged throughout the pandemic by short-staffing and even suspended annual leave in December when COVID-levels were on the rise. Also in December, the union decried the understaffing within the Department by stating that it put people and buildings at risk during a fire at Crystal City’s restaurant row on 23rd Street.

There are now 274 sworn employees and 23 civilian employees within AFD, and the the department needs 347 to be fully staffed. The numbers include 23 recent Recruit School graduates announced on April 15, and the new firefighters and EMTs spent seven months in training. 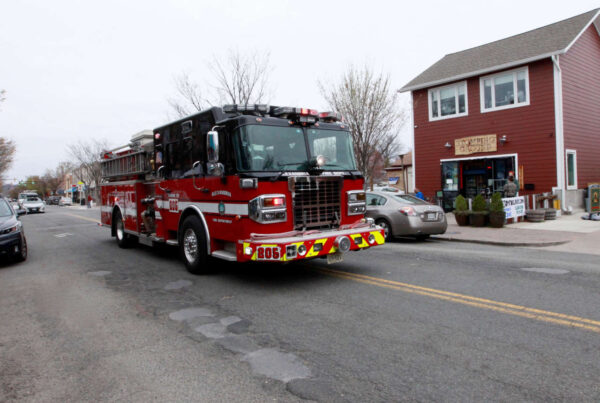 The Alexandria Fire Department is among the lowest paid in the region, with full-time firefighter salaries starting at $49,294. The department recently elected its first officers for collective bargaining, which will result in a labor agreement hammered out with the city by this fall.

Firefighter paramedic Alexander Lee is assigned to the training division, and says he has seen a 25% dropout rate in the staff he’s trained over the last six years.

“As a firefighter paramedic, I’ve been on calls where I’ve tried, in vain, to resuscitate a deceased infant, and then two hours later be told that I have to stay at work for another 24 hour shift due to short-staffing,” Lee said. “Members see other jurisdictions where their firefighters work less hours, make more money, spend more time with family and experience less burnout, and ask, ‘Why should I stay here?'”

“One of the major things that has been getting me through this time is cherishing the moments that I am able to spend with my daughter who will be two in June,” Europe said. “As some of you with children may know, she’s reaching an age where she’s going to start remembering special occasions like her first Easter egg hunt.”