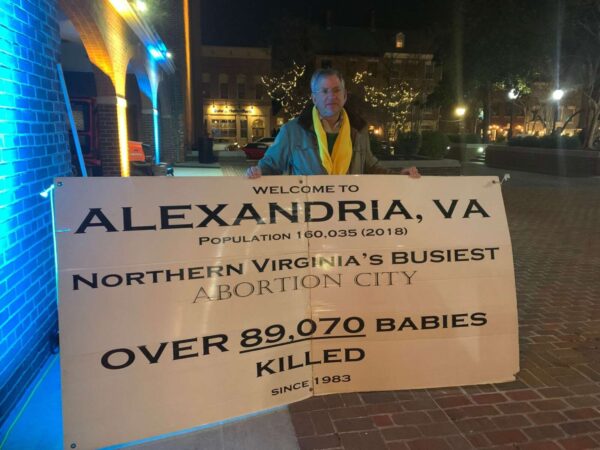 There was no proclamation at the March 8 City Council meeting honoring abortion providers, but that one had even been planned in the first place was enough to fill several rows of City Hall with anti-abortion advocates rallying against the canceled proclamation

While the casual viewer of the March 8 agenda might be baffled at the presence of anti-abortion advocates at the meeting, the docket had originally included a proclamation of March 10 as “Abortion Provider Appreciation Day.” Local religious groups were stirred by clergy like Arlington’s Bishop Michael Burbidge, despite the proclamation being pulled from the agenda at the request of Mayor Justin Wilson.

“Somebody saw that it was on the agenda and put the word out,” said Larry Cirignano, who said he heard about the event from the Queen of Apostles Catholic Church. “To think that we should honor people for killing babies…”

Cirignano said local advocates said the closure of some clinics offering abortions in Virginia has been encouraging, particularly the Planned Parenthood in Falls Church, and Cirignano said his hope is the West End facility can be similarly blocked through bureaucratic means.

“The one at Landmark is going to have to move, so wherever they move to, that could be blocked,” said Cirignano. “The City of Fairfax decided they needed one more parking spot they didn’t have.”

Elsewhere, onerous health inspections have been used as a cudgel to shut down Planned Parenthood clinics. The likelihood the that the all-Democrat City Council in Alexandria would go along with that seems slim, but Cirignano argued anti-abortion sentiment could transcend party lines. A Gallup poll indicated that around 8% of Democrats think abortion should be illegal in all circumstances, while 50% think abortion should be legal in all circumstances.

Wilson said while he and his colleagues on the City Council still support the message, he pulled it with their consent after deciding it was too controversial a topic for the typically inoffensive “proclamations” section of a public hearing. Other proclamations at that meeting, for example, expressed support for Meals on Wheels and recognizing Brain Injury Awareness Month.

“This was one of the [abortion] providers in the city had approached us because this is a national observance,” Wilson said. “One of my colleagues had requested we put it on the docket and I had agreed to do so. Upon reflection, these proclamations are usually non-controversial, but this one is more controversial. After talking with my colleagues and reflecting a bit, it makes sense to remove it from a docket.”

Wilson expressed some regret for including it, but not for the intent behind it.

“Upon reflecting I shouldn’t have put it as a proclamation,” Wilson said. “It’s the kind of thing we could handle as a resolution or presented at an event. That was the judgment and everyone unanimously agreed. The sentiment is to show our support for these healthcare workers who perform a legal and necessary service to our community in our community. We have two providers in our city who do that work under adverse conditions, and we wanted to show support for the work they do.”

END_OF_DOCUMENT_TOKEN_TO_BE_REPLACED

More Stories
Alexandria proposes extending emergency business relief to June 30Ask McEnearney: In a ‘seller’s market’ do I need to prepare my house for sale?