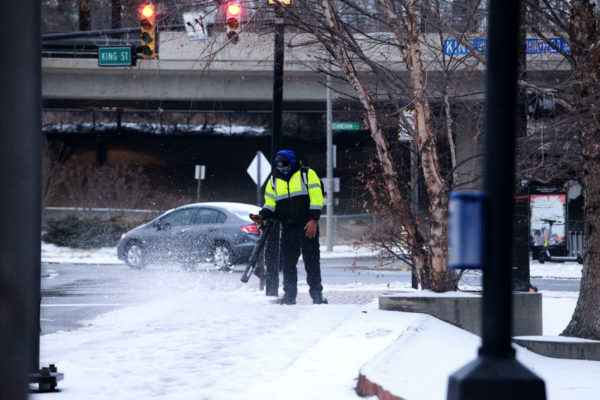 Alexandria is hoping to cut back on the noise nuisance from leafblowers and street buskers.

At a Waterfront Commission meeting last week, city staff discussed changes made to the noise code in December.

“[For busking] the only change is the same provisions in the business district are now city-wide,” said William Skrabak, deputy director for infrastructure and environmental quality.

Skrabak said the decibel standard actually loosened slightly for commercial properties, from 60 decibels to 65 at the property line until 11 p.m., but the main issue with noise in the city is lack of resources for enforcement.

“Our office is the only one with noise meters,” Skrabak said. “We do occasionally schedule measurements at night, but the one position that’s primary inspector position is currently vacant, so we’ve been struggling to fill that gap. We are hoping additional resources come out of the manager’s [budget]. I think that would have more of an impact than code changes if we have additional resources.”

Skrabak also said there’s been complaints to the city about noise levels from leafblowers.

“There is a lot of interest in our community about controlling leafblowers,” Skrabak said. “Leafblowers are inherently louder and more obnoxious than other equipment. Because of the Dillon Rule, we don’t currently have the legal authority to prohibit leaf blowers, but [the city] did include that in our legislative package — to start the process to get enabling legislation down in Richmond so localities could potentially [either] prohibit entirely or [require] an electric one, which is a little quieter.”

Skrabak said it was unlikely to be approved this year, but it at least gets the conversation started.

“We’re not optimistic we’re going to get it on the first try,” Skrabak said. “Sometimes these things take a couple of years and multiple localities to start pushing.”

Some on the Waterfront Commission said pushing for change on leafblower policy is long overdue.

“Electric leafblowers area no-brainer,” said Waterfront Commission member Patricia Webb. “We have to do that for the environment as well as noise and it should have been done years ago, but we also need to have quiet hours like most cities have, especially on Sundays and holidays. I don’t know how many times I’ve planned to have people out on the deck and we’ve had to go inside or elsewhere because someone is doing their self-help project… People just have no sense of decency anymore and we have to impose quiet hours for the well-being of people’s lives at home.”

Stephen Thayer said consternation around noise levels for street musicians comes in large part from “competing buskers” at the 100 block of King Street who perform until 11 p.m. and later.

But others argued that pushing for more resources to tackle busking and other noise issues was a heavy-handed approach to an overblown issue.

“Noise ordinance doesn’t take into account true noise or nuisance, like the quality of noise,” said Waterfront Commisioner Nate Macek. “It’s a flatfooted way of addressing this need. I would not personally support further resources in this area. I think it’s a fool’s errand and a waste of city resources and it’s the opposite of where we need to be headed as a city.”