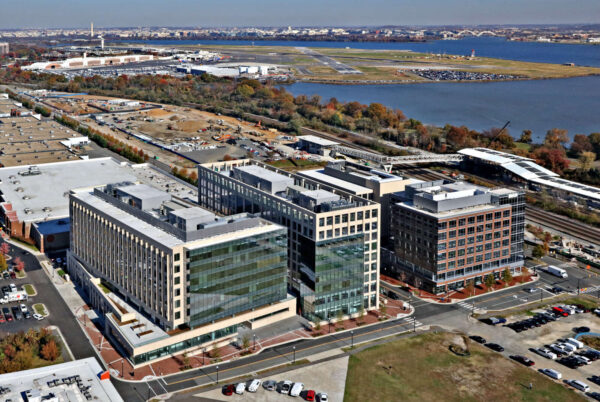 It took more than 10 years to dream up and two years to build, and the 370,000-square-foot Potomac Yard headquarters for The Institute for Defense Analyses officially opened this month for more than 1,000 employees in Alexandria’s Potomac Yard neighborhood.

The new office was designed in 2012 by D.C.-based KGD Architecture, and is located a stone’s throw from the incoming Potomac Yard Metro station, which is expected to open this spring.

“The new IDA headquarters will allow more than 1,000 employees to use mass transit and be within easy reach of the Pentagon, IDA’s primary client,” the nonprofit said in a press release.

The property includes a two-story lobby, a courtyard with views of the D.C. skyline and a “robust” art collection for the public on street-facing spaces. There is also an auditorium that seats 300 people, as well as breakout rooms, a green room, large conference rooms and a multimedia recording studio.

IDA said that the property also takes the health of staff into account.

“For IDA – a non-profit dedicated to answering the most challenging U.S. security and science policy questions – safeguarding the health of staff and staying up and operational under hazardous conditions was critical,” IDA said in the release. “The design team deployed an array of resilience-building strategies, including interventions aimed at combatting the spread of infectious diseases. The implemented measures include enhanced filtration, ultraviolet germicidal irradiation (UVGI), humidification, and ceiling fan design for increased circulation, as well as 3D modeling of epidemiological scenarios and space usage patterns.”