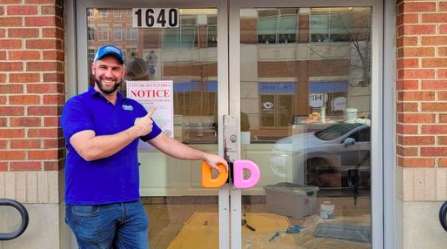 There will soon be a second Chewish Deli bagel shop in Old Town, as the company officially announced it is working to open at the former Dunkin’ Donuts space at 1640 King Street.

Chewish Deli opened its first brick and mortar at 807 Pendleton Street in the Braddock area in October 2020. It began seven months before that as a food truck selling bagels, hot pastrami and Reuben sandwiches.

The new location is blocks from the King St-Old Town Metro station.

“In this new location you’ll be able to sit down and enjoy your bagel, sandwich and coffee. With much more space in the front area than at Pendleton, we will be expanding out our traditional deli offerings,” the company announced on Facebook. “We will be offering more cold options and a few less hot items than Pendleton since there isn’t the option for a grill there.”

The company said that it is working on getting new equipment, renovations and hiring staff.

Owner Gregg Linzey, in a previous interview, told ALXnow the secret to making the perfect bagel.

“It’s simple, but not necessarily easy,” Linzey said. “You have to get every part of the equation right for all of your ingredients, like making sure the dough has the proper hydration. You need the perfect percentage of water, salt, flour, and we use malt syrup as our sweetener. That’s the key to getting a good New York-style bagel. No sugar, no brown sugar, no honey. Just malt syrup.”