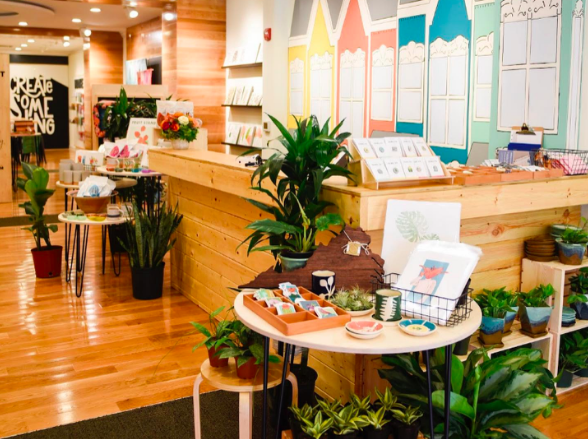 In the market for a cutting board in the shape of Virginia, Bloody Mary mix, candles and jewelry? You’re in luck.

Shop Made In VA opened for business last Thursday at 1121 King Street, offering workshops and products from more than 120 small business owners in Virginia.

“We’re looking for local gem maker in Virginia, and we need more jewelry makers,” Shop Made In VA store coordinator Mady Sieracki told ALXnow. “So far we’ve had a watercolor class with mimosas, a block printing class, and yesterday one of our makers was serving up Bloody Mary’s and tastings of hot sauces he sells.”

The Alexandria market is part of a regional expansion by Stacey Price of People Make Place and Michael Babin of Neighborhood Restaurant Group, who founded Shop Made in DC in 2017. The pair have opened five locations in D.C. alone, featuring more than 300 makers, and the Alexandria location is the first outside of the District.

Shop Made In VA is not working with other local maker’s groups in the city, like the Alexandria Maker’s Market and MadeinALX, the latter of which launched a holiday popup last week at 1 Wales Alley by the waterfront in Old Town.

“We’re not trying to be competition in the area,” Sieracki said. “We just want to be a centralized area to support small business owners in their state.”

The location is the former home of Foundation Fitness, which moved to 1901 Mount Vernon Avenue in Del Ray.