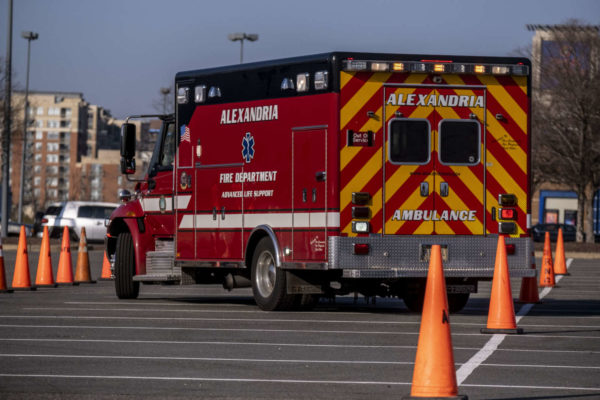 In the last few months, a head-long battle between Alexandria’s police and firefighters against city leadership has come to a head as first responders unions say underpayment has left staffing at critical levels.

City staff recently laid out the potential costs to implement a pay raise for first responders, but unions representing those first responders say that sticker shock is less intense in the broader context of the budget.

“The question we should be asking is, ‘Is ensuring high-quality first responder services a priority for this community?'” said Captain Josh Turner, President of the firefighter union IAFF Local 2141. “For a 10% pay increase for our entire fire department, it would only take an additional $3.4 million in the proposed upcoming $780 million budget. That’s less than 0.5% of the upcoming budget. So if this is an actual priority for Council, finding $3.4 million in the existing budget shouldn’t be difficult.”

A 1% pay increase would cost around $3 million and the city would need to increase the tax rate by 0.7 of a cent if it wanted to pay for the increase from tax revenue, acting Human Resources Director Jen Jenkins said at a City Council retreat.

A breakdown of the 1% pay scale increase costs indicated that general city staff comprised $2 million of the $3 million total. At the retreat, City Manager Mark Jinks noted that city employees aren’t unionized like police or firefighters are, but shouldn’t be left out of the pay raise discussion.

For the first responders, the breakdown was:

Not only have first responders said a 1% increase would be “insulting”, Turner said there are alternative sources to pay for the increase.

Turner noted that the Annual Comprehensive Financial Report given to the City Council last night (Tuesday) indicated that there was around $1.9 million left over from the past fiscal year. The chart shows $2.9 left over in the police budget.

“That’s half the money we would need for a 10% increase right there in the leftovers from last year,” Turner said. “We’re not asking the City to go bankrupt, or to deplete the rainy day fund, or for the City to ruin their bond rating. We’re just saying that, if it’s a priority, the City has the money to pay their first responders fairly.”

Marcus Downey, vice president of the police union IUPA Local 5, also objected to the characterization of a tax increase being the only option for funding the pay raise.

“The archaic excuse of requiring a substantial tax increase and placing the burden on City residents is straight out of Alexandria City Hall’s playbook,” Downey said. “Pre-election, we were told employee compensation would be a priority. There were literally zero comments about a need to increase taxes. Less than a week after the election, the conversation quickly shifted to ‘the residents will have to pay more in taxes.'”

Both police and firefighter unions have said low levels of staffing threaten the reliability of city services. Union representatives have previously claimed the low staffing could lead to the closure of a station, a claim Mayor Justin Wilson said was untrue.

“For us, at the end of the day, we’re talking about people,” said Turner. “We’re talking about a half percent for our first responders to get a fair shake — not for a park or for a building or for inanimate objects. We’re talking about people. People who came to work throughout the entire pandemic, running the risk of exposing themselves, and their families, to COVID, in order to serve the City.  People who in some cases have worked over 70 hours a week to provide life-saving services to the citizens of Alexandria.”

The FY 2023 budget discussion is currently in the early stages, with a proposed budget scheduled to be presented on Feb. 17, 2022.