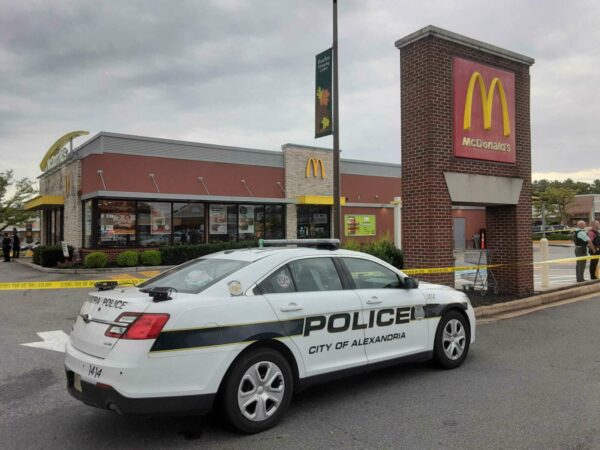 (Updated 10/22) One of the possible motives being the recent violence in Alexandria City Public Schools being investigated by the Alexandria Police Department seems to be, of all things, disagreements over music lyrics, a police officer said at a meeting of the Gang Prevention Task Force last night (Wednesday).

“The issues at the school… appear to be a dispute over rap music,” said Lt. Jerry Newcomb, commander of the Crimes Against Persons Section. “It’s an ongoing investigation. We’re hoping to find out more… It’s a dispute over lyrics. Some of them think that the lyrics they’ve come up with are proprietary in some way, but we’re still trying to dig into it. That’s the underlying reason that we’re hearing.”

Newcomb said the investigation is hindered by an unwillingness of witnesses to come forward.

“A lot of the problems are we do have witnesses on the scene, but when we go to talk to them, none of them want to talk to us,” Newcomb said. “Our information is extremely limited, but we’re doing the best we can.”

Michael Johnson, from the Department of Recreation, Parks and Cultural Activities, said that he recently attended a gang prevention conference in Virginia Beach and talked to officials from North Carolina, who said they’re having similar issues.

“These issues from the young guys rapping, that’s not just here, but it’s down to North Carolina and Georgia too,” Johnson said. “It’s coming from YouTube and Facebook. I don’t want anyone to think it’s just Alexandria, it’s happening along the whole East Coast. Guys are traveling from other areas who call themselves rappers and are engaging in this and our kids are doing the same.”

The meeting also included an update on gang activity, including a note from one official that while there are reports of MS-13 graffiti popping up around Old Town, but at least some of that is from a person police know to not actually be affiliated with the gang. Officials also said that some of the newer gangs getting police attention are 47 West Side and South Side Chirilagua, which police say is something of a farm team for MS-13. Police also said South Side Chirilagua are also partially merging with another crew and rebranding.

“These are the types of gangs that always worry us because we don’t have a lot of intel on their activities,” said Jay Lanham, director of the Northern Virginia Regional Gang Task Force.

Also, because it’s a city meeting with elected officials from the School Board and City Council, naturally the School Resource Officer discussion cropped up again. Both School Board member Ramee Gentry and City Council member Mo Seifeldein are on the task force — and both also leaving their elected office before the next meeting in January. During the meeting, Gentry urged the group to nudge the city toward reconsidering its earlier SRO position and urged “other elected officials” in the group to reconsider.

“Some of the discussion around SROs has been tainted,” Gentry said. “I really hope that the next batch of elected officials will listen to this group and carefully consider the best way to move forward in terms of best way to make our students feel accepted and protected in our school buildings.

Seifeldein, one of the School Board members who had advocated for SRO removal, noted that he was the only other elected official in the group.

“When I or Council members make policies, we follow facts and experts and peer-reviewed studies when we make policies,” Seifeldein said, “and I would hope that you do the same when you speak.”

Anyone with more information on any of these crimes is asked to reach out to the police’s non-emergency line: 703-746-4444