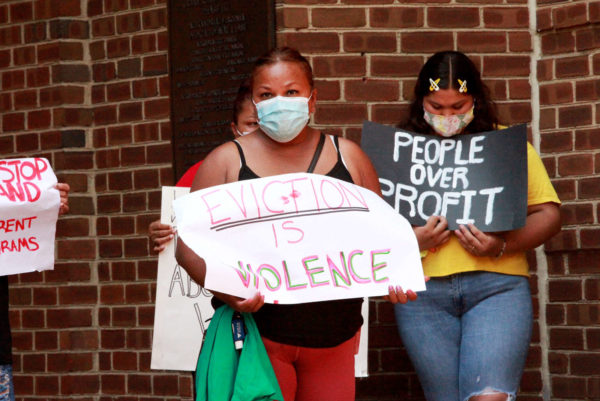 After the end of the eviction moratorium, Alexandria’s City Council is looking to step up protection for locals facing eviction.

According to a docket item for tomorrow’s (Tuesday) City Council meeting, city staff are recommending that the city fund new services and positions aimed to support Alexandria households going through the eviction process.

The proposed supports are:

The suggestions came out of the city’s Eviction Prevention Task Force, which started last year and is comprised members of various city departments and outside organizations, like Tenants and Workers united and Christ Church.

“The housing crisis brought on by the COVID-19 pandemic has sharply increased the risk of long-term harm to renter families and individuals, disruptions of the market affordable housing market and the potential for foreclosure and bankruptcy, especially among small property owners,” Jinks wrote in the memo. “Following eviction, a person’s likelihood of experiencing homelessness increases, mental and physical health are diminished and the probability of obtaining employment declines. Eviction is also linked with respiratory disease, which could increase the risk of complications if COVID-19 is contracted. Instability, like eviction, is particularly damaging to children, who suffer in ways that impact their educational development and well-being.”

Even before the moratorium expired, some local landlords were starting the eviction process and laying the groundwork to evict tenants. Unemployment skyrocketed to record highs last year, though unemployment figures have gradually improved over the last year. In late August, the Supreme Court invalidated a federal eviction moratorium that would have halted evictions in some places through Oct. 3. The memo noted that Legal Services of Northern Virginia have provided legal assistance to 1,031 individuals through courthouse outreach and the Office of Community Services and the Office of Housing have assisted 3,717 households to successfully apply for rental assistance.

“The immediacy of this halt in the eviction moratorium has created devastating impacts to some households in our community, with an increase of eviction filings,” Jinks wrote.

The memo noted that since the pandemic started, 2,135 residential “Unlawful Detainer Summons” — which initiates the eviction process — have been filed. Of those, 599 (28%) were found in favor of the landlord and 1,307 (61%) were dismissed or classified as non-suited. In total, 283 writs of eviction have been issued.

“These cases could have been stopped by the CDC moratorium anywhere along the process,” Jinks wrote. “With the moratorium lifted, approximately 134 households are believed to be at immediate risk of eviction.”

Jinks wrote that for local residents that have been struggling to pay rent through the pandemic, the worst could still be ahead.

“The overall trends in the data do not indicate that there is an uptick at this time in eviction filings, but rather that there were many households over the past year and a half that started the eviction process but were legally protected by the CDC moratorium,” Jinks said. “Now that the moratorium has ended, staff anticipates that the pipeline will begin to move again, and the City will experience an increase in residents who need assistance in applying for state rental assistance and to find new housing, and who will require other resources.”

The positions will be funded by the American Rescue Plan Act for the next 12 months — $357,000 for City staffing plus eviction storage costs plus Legal Aid Justice Center $60,000. The memo noted its likely that the program will need an additional $500,000 in the next tranche of ARPA funding in the FY 2023 budget.