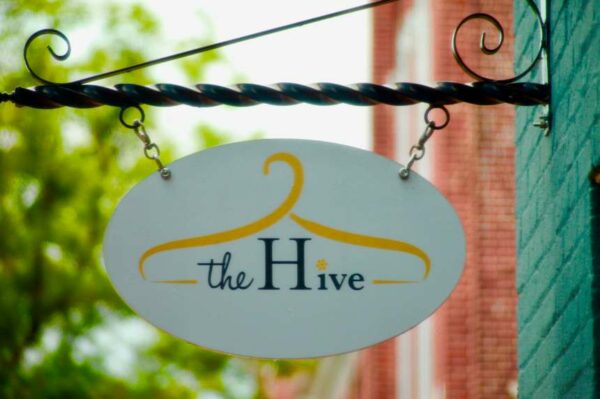 While many business owners are just happy to have the lights on, Elizabeth Todd has major expansion plans in the works.

At 900 square feet, The Hive at 301 Cameron Street is just too small a space to house all the inventory Todd has in mind. She’s currently in the works to sign a lease down the street at 315 Cameron Street, a 2,000-square foot townhouse and former home to the A Galerie antique shop.

“If we open any day in October, even if it’s the 31st, we’ll be happy,” Todd told ALXnow. “I would say a mid to late October is hopeful.”

The new location will have more dressing rooms and a private showroom for clients who want to make an appointment for themselves or their friends.

“Folks can have a private shopping experience in our showroom,” Todd said.

Todd will keep The Shoe Hive as-is at 127 S. Fairfax Street. She started her business with the shoe concept in 2003, and opened The Hive at 301 Cameron Street in 2016.

Todd is also going to convert the 301 Cameron Street space into a casual men’s clothing shop by next spring called “The Hive For Men”.

In the meantime, Todd is going to be going to New York this month to find more clothes to sell back in Alexandria. What kind of clothes? Casual, she says. That’s what her base of local customers have gotten used to over the last year, and buying new clothes can be refreshing, she said.

“Getting dressed can give you a sense of purpose,” she said. “After a few days of sitting around in your sweatpants or pajamas, it feels better to get dressed up. You’re more productive, and people now need more casual clothing in their life. So, We’ve filled that niche where a lot of professional women who shopped with us before that were used to wearing suits downtown every day just don’t need to do that anymore.”