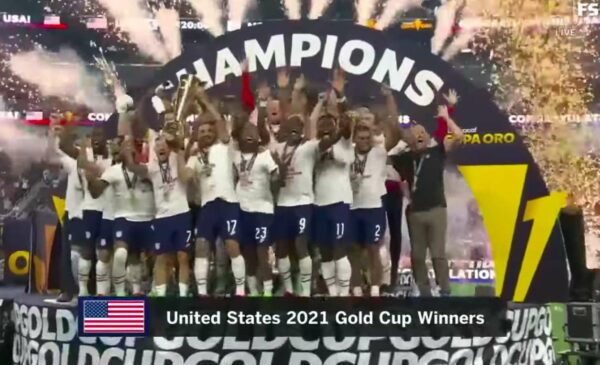 Alexandria midfielder Eryk Williamson was reportedly disappointed to not make the U.S. Olympic team, and instead found gold in the U.S. National Team’s dramatic 1-0 upset over defending champion Mexico in the in the Concacaf Gold Cup Final.

Williamson, a member of the state championship-winning T.C. Williams High School varsity soccer team in 2014, played most of the game Sunday in Las Vegas. This is the second straight tournament final won by the U.S. against Mexico, following their 3-2 win in June’s Concacaf Nations League Final. Williamson didn’t play in that game, however, as he was aded to the roster for the U.S. in the Gold Cup in July.

Williamson has played midfield for the Portland Timbers since 2018. As a Titan, Williamson was named First Team All-State, All-Conference and All-Region. He went on to the University of Maryland, where he was named Big Ten Midfielder of the Year.

A big congratulations to Eryk Williamson on his call up to the #USMNT for the 2021 Concacaf Gold Cup!