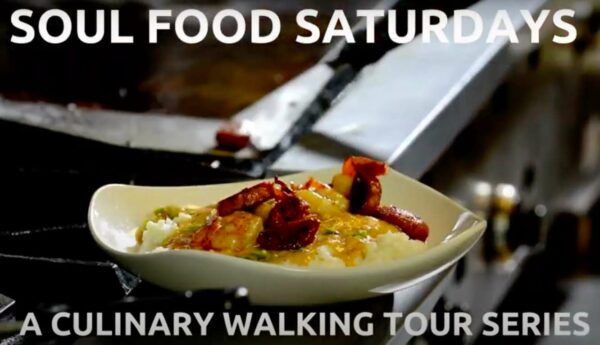 In recognition of Juneteenth, last month the owner of Goodies Frozen Custard & Treats in Old Town partnered with Rachel Tracey of D.C.-based Historic America tours for their first Soul Food Saturday. So far, meals have included shrimp and grits and Jamaican jerk chicken.

“Growing up and watching my mom and my grandmother cook brings a lot of the inspiration to the food,” Byrd said. “It’s what I grew up with.”

In Tracey’s ‘Lunch & Learn’ food tour series, she guides groups to historic sites in a multi-sensory walking tour. Customers use interactive tablets as they stop by Market Square, Christ Church, the Carlyle House, Alfred Street Baptist Church and Freedom House. They smell tobacco — one of Alexandria’s cash crops of the 17th and 18th centuries — and then wrap up the experience with a home-cooked soul food lunch at Goodies, usually followed by frozen custard.

“It’s important for us to tell a full and inclusive narrative,” Tracey said. “We talk about the Trans-Atlantic Migration, where people were brought over to Colonial America. There’s also the trans-Atlantic food migration. There are foods that we can directly trace back to Africa, and so we share those connections on the tour.”

One of Tracey’s favorite stories is about Hercules Posey, the personal chef to George Washington. While walking along the grounds of Christ Church, Tracey will talk about Posey’s escape from slavery, and well as Washington’s recovery attempts before being granted freedom after the founding president’s death in 1799.

“Washington loved his cooking and took Hercules with him when he was operating the government out of Philadelphia,” Tracey said. “There was a rule in Philadelphia at that time that if any slaves were in the city for six months to the day that they were automatically set free. So, Washington would make sure that (his slaves)… would go home to Mount Vernon for a bit before they hit that six month mark and come back.”

Tickets for the experience cost $95 per person, and Byrd isn’t yet sure what’s on the menu for the next meal, which will be on Saturday, August 21.

“I haven’t exactly figured it out yet,” Byrd said. “I’m thinking about something with black-eyed peas and fried okra for next month.”