After years of legal wrangling and pandemic pressures, the controversial halal slaughterhouse at 3225 Colvin Street quietly opened on Wednesday, July 28. There is no discernible smell of chickens in the air yet, and there are hundreds in cages in a back room.

The D.C. Poultry Market is now open seven days a week from 8 a.m. to 6 p.m. and is giving away two free chickens per customer for the first two days that it is open.

“If you go around the neighborhood, this is the cleanest place,” owner Abdul Mused told ALXnow. “We are cleaner than a supermarket. Do you smell any chickens? Of course not.”

Mused says he spent more than $400,000 in rent for the property, which is near a number of pet-related businesses, including the Wholistic Hound Dog Academy, Frolick Dogs, Dogtopia, Pinnacle Pet Spa & More, as well as the Wild Bird Center of Alexandria. A number of those neighbors deluged City Council with letters after their 5-2 approval of a special use permit in 2019, which gave Mused the green light.

Or so he thought.

Neighbors were concerned that the smell of chickens would incense canines at these businesses. Alexandria Circuit Court Judge Lisa Kemler ended up throwing out two cases levied by 10 area citizens and business owners against the city and council for the decision. At the end of the day, Mused reportedly spent $600,000 on interior renovations and $150,000 in legal fees, and says he won’t be opening any new locations in the area anytime soon.

“It’s not worth it for me,” he said. “My plan is to open one-to-two stores a year. I opened four stores while this one was in development, and I’m moving on. My next city is Raleigh, North Carolina.” 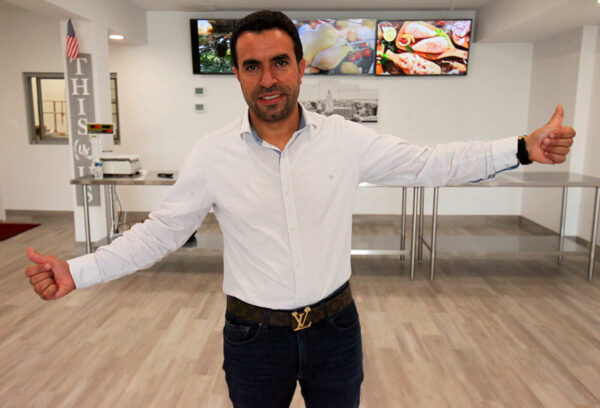 Mused, who owns 18 slaughterhouses around the country, was born in Yemen and emigrated to the U.S. in 1997. He started work as a teenager at his father’s corner deli in New York City, and with his brother, Ahmed, opened their first halal slaughterhouse.

“I had two locations by the time I graduated high school,” Mused said, adding some advice to business owners facing adversity. “You need to stick to it, and not everybody can do that. If you give up once you will never succeed again.”

The slaughterhouse will get 300-to-500 chickens in closed box trucks every other day from an Amish community in Lancaster County, Pennsylvania. Customers select a chicken in a steel cage with a number attached to its leg. The customer will get a ticket with the number as the chicken is taken into another room and slaughtered in accordance with Islamic law.

“We are honored to cook the most controversial chickens in modern Alexandria history,” Pork Barrel BBQ owner Bill Blackburn said. “Although I’m not sure they are still considered halal after being cooked on equipment that also cooks pork.”