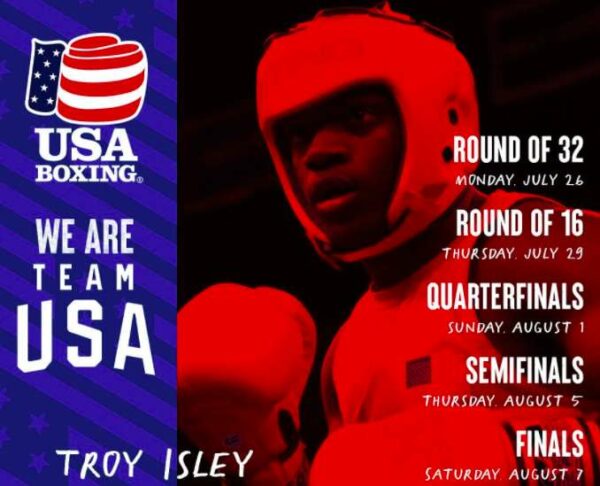 Alexandria’s Troy Isley won his Olympic debut on Monday against middleweight Vitali Bandarenka, and his boxing club at home is eager that he win a medal.

The Olympic games have been Isley’s dream since he boxing at the Alexandria Boxing Club when he was eight years old.

“Everything is one punch at a time in this sport, and Troy is definitely going to get a medal,” Alexandria Boxing Club coach Jeffrey “Steady” Johnson told ALXnow. “He looked really good.”

Isley, a middleweight, is one of three T.C. Williams High School graduates in the Tokyo Olympics, along with sprinter Noah Lyles and high-jumper Tynita Butts-Townsend. After launching his pro debut earlier this year, Isley (now 2-0 professionally) and teammates Keyshawn Davis and Duke Ragan are the first-ever pro boxers to fight for Team USA in the Games.

In his Team USA bio, Isley lists Kay Koroma and Dennis Porter as his coaches. Porter, the founder of the Alexandria Boxing Club, passed away earlier this year.

Johnson said that Isley’s fame has led to a waiting list for kids to be trained.

“We got started with the Alexandria Boxing Club after Sugar Ray Leonard won the Olympic gold medal in 1976,” he said. “Boxing really blew up in the area. That’s why we started. Now we’ve got a waiting list for a while.”

Isley, who lists Leonard as his favorite boxer of all time, next faces Russia’s Gleb Sergeyevich Bakshi on Thursday.