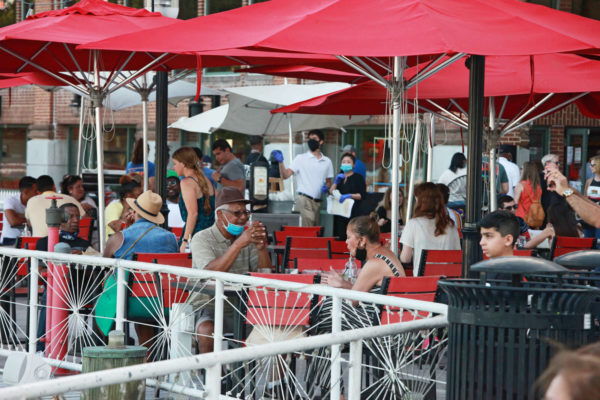 Alexandria Police are investigating a claim that a woman’s drink was drugged at Vola’s Dockside Grill and Hi-Tide Lounge on the waterfront.

The woman filed a police report after the incident, which allegedly occurred on the evening of July 9 — the same night as the fireworks for the city’s birthday celebration. The woman reported the incident on NextDoor, and said she was sitting in the walkthrough area next to the Torpedo Factory Art Center when it occurred.

“I enjoyed a couple of Orange Crushes, scrolled on my phone and watched the crowd,” the woman reported. “I can’t tell you much of what happened after that, besides knowing now (Google maps tracker) that I miraculously walked the couple of blocks back to my apartment. My fiance returned home from work to find me a step inside of my apartment on the floor. I was unable to talk, stand, or remain conscious. I have complete amnesia of any of the events from receiving my last drink forward.”

The woman, who says she is a registered nurse, wrote that her condition persisted for 10 hours or so, that she did not go to the hospital and instead contacted her primary care physician.

“I am usually pretty aware of my surroundings,” she wrote. “I cannot tell you what happened, why, or anything like that, though I wish that I could. It is very highly unlikely that I had left my drink alone outside to go inside to the bathroom, etc. But it seems the only explanation is that something was slipped into my drink.”

The owner of Vola’s told ALXnow that they are working with police. He said no one has alleged any employees did anything wrong and that what occurred is still unclear.