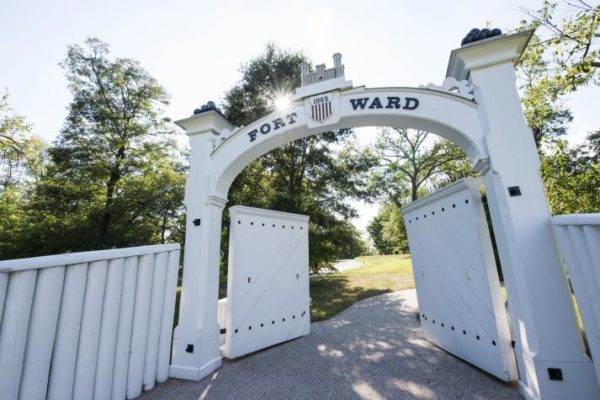 Alexandria is looking for community feedback on the recognition and demarcation of Black cemetery areas and burial sites at Fort Ward Park.

The park at 4301 West Braddock Road, was placed on the National Register of Historic Places in 1982, became an African American community after the Civil War. For more than a decade, the city has worked on identifying graves that were part of “The Fort” neighborhood, and made ground-penetrating Radar Surveys in 2009.

Researchers found gravestones just south of the Oakland Baptist Cemetery, “which is a known grave yard surrounded on three sides by Fort Ward Park,” according to a city study. The property was converted from a Black neighborhood to a park in the 1960s, and includes a number of other scattered graves.

“The presence of a few gravestones, as well as documentary evidence and accounts from oral history interviews, have indicated that there are a number of known and potential grave locations in the park that were part of ‘The Fort’ neighborhood,” the City noted in a study. “However, the exact locations of the burials (some of which are located in a former maintenance yard for the City of Alexandria’s Department of Recreation, Parks and Cultural Activities), and the limits of cemeteries on the property have never been determined.”

In 2014, the Alexandria Contrabands & Freedmen Cemetery opened to the public. It is the burial place for about 1,800 Black residents who fled slavery, and was eventually turned into a gas station in the 1950s.

On July 31, staff with the Office of Historic Alexandria will discuss issues and ideas for the possible fencing options for some sites and additional approaches for memorializing sites. The meeting will be held at the museum from 10 to 11:30 a.m. on Saturday, July 31.