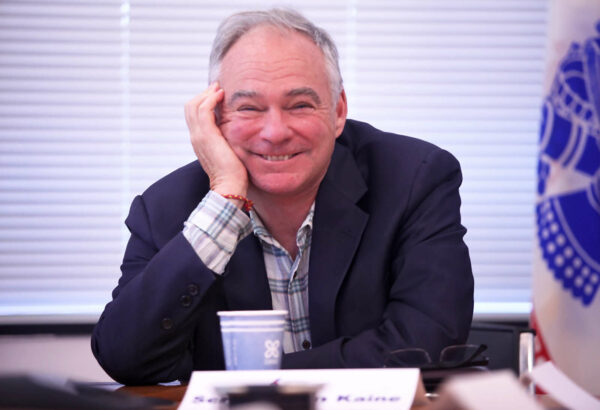 Virginia Senator Tim Kaine got an earful on military family needs at a roundtable he hosted Tuesday morning at the National Military Family Association in Alexandria.

Facing few childcare options, one military spouse had to take three years off of work as a physician’s assistant to take care of her young children.

“I have three kids that will have to go to different (childcare) places,” the woman said. “Because in this area it’s really hard, at least in my experience, to find childcare from infant through the lower elementary ages. So, I’m going to be driving around or finding a nanny for my youngest, which is on the plus side of $20 an hour is what we’re finding, which is cost prohibitive.”

On-base childcare options are scarce, as an estimated 65% of U.S. military families are forced to pay for childcare out of their pockets.

Kaine wrote the Jobs and Childcare for Military Families Act, which was introduced into the Senate last month. He’s trying to get the Act attached to the massive National Defense Authorization Act, which Congress will be considering later this summer. As active duty military spouses experience high rates of unemployment, Kaine said he at least hoped the pandemic has taught employers that their workers can largely work from home.

“if we can help families with children have more knowledge in their pocket, and we can fund more childcare — those would be two big things,” Kaine said. 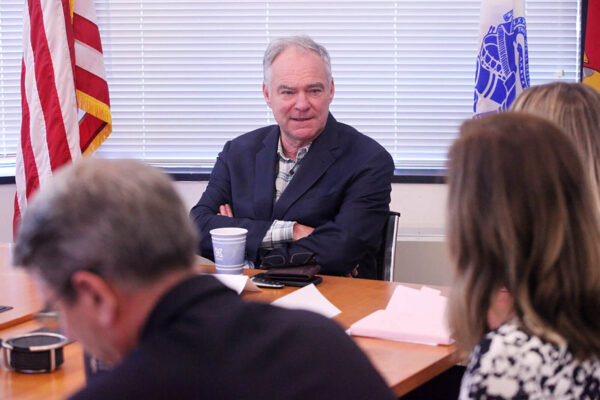 The Act would help military spouses get jobs with the expansion of the Work Opportunity Tax Credit, in addition to the creation of flexible spending accounts so that childcare expenses are paid with pre-tax dollars.

One Space Force officer living in Alexandria said that her civilian husband was kept from taking jobs that required travel, since getting childcare was too difficult.

“In the space force between 30 and 40% of our missions are in 24/7 facilities,” the officer said. “There’s an assumption that a spouse is always going to be there to pick up the slack.”

Kaine, the former Virginia Governor and Mayor of Richmond, was a missionary in Honduras and never served in the military, although one of his sons is a U.S. Marine reservist. He is also a member of the Senate Armed Services Committee, as well as the Foreign Relations and Budget Committees.

“I’m sort of hoping that maybe a silver lining of the last year has been people realized, ‘Wow, a lot of folks can do really great work, even if they’re not in the same zip code as the office.’ And I know it’s been a challenge for military spouses, this move phenomenon — ‘I’d rather not hire this person even though they may be the more qualified because they’re probably gonna have to move somewhere.’ Well, employers are much more comfortable now with realizing we have a whole lot of great employees who were doing their work for home for last year and they were being very productive.”