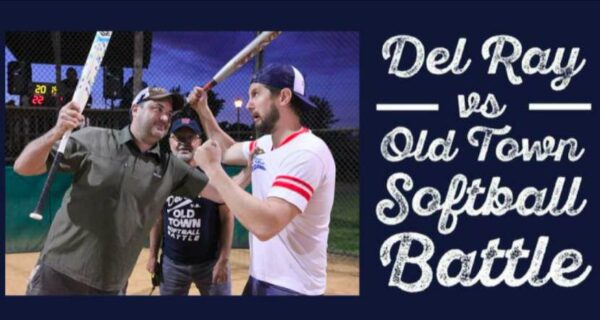 Old Town and Del Ray businesses are back at it again, and the competition for supremacy will be on full display at next Wednesday night’s Old Town-Del Ray Softball Battle.

Mayor Justin Wilson will throw out the first pitch at 6:30 p.m., as the two teams from Del Ray and Old Town businesses will play for bragging rights and the John Porter Cup, a trophy that was metal crafted by Torpedo Factory artist Chris Erney. It is unclear whether Porter, the former principal of T.C. Williams High School, will make an appearance at the event.

It’s the third-ever softball battle between the competitors, as Del Ray won in 2018, Old Town won in 2019 and then the teams had to take a break in 2020 because of the pandemic.

That didn’t stop Del Ray’s team captain Bill Blackburn from competing against Old Town’s team captain Trae Lamond in an oyster eating contest last year, and it resulted in a 103-103 draw after Whiskey And Oyster ran out of oysters.

This year’s contest will be held at Eugene Simpson Stadium Park.

“We’re thirsty to drink from the John Porter Cup,” Blackburn told ALXnow. “Of course, that’s one drink at a time, and we’ll sanitize between drinks… Del Ray has been eager to regain the cup for two years, since we missed our chance to take it back last year. So, there’s a lot of desire, there’s a fire in our bellies.”

Lamond, in a Zoom meeting with Visit Alexandria earlier this week, said that Del Ray cheated in 2018.

“We’re going to destroy them,” Lamond said. “I’m predicting we win by double digits again this year. There you go. We can bet through a variety of channels that are all now available on our apps on our phones.”

Blackburn was ejected from the game in 2018 for arguing against a call by the umpire, Sheriff Dana Lawhorne, who will once again be officiating with his deputies. He scoffed at the notion that his team cheated in the 16-15 nail-biter win in 2018.

“I don’t recall that,” Blackburn said. “In fact, we won despite poor officiating from Dana Lawhorne, and I was ejected from the game. And this is when I was fairly pleading my team’s case.”

There will not be any food trucks at the event, and fans are encouraged to bring takeout from an Alexandria restaurant.