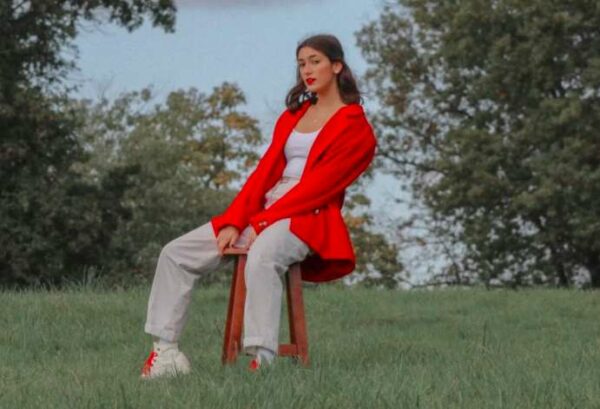 It wasn’t easy having a famous sister, and that’s why Mia Humphrey chose art over science.

Two years ago Humphrey’s sister Ana won a $250,000 scholarship for her work in locating planets in distant solar systems. Ana is now at Harvard.

“It was a little hard,” the 18-year-old Humphrey said. “I was a sophomore and my sister was a senior when she started doing all of the crazy science stuff. But we do actually get along very well. We really don’t fight over much things except, like, we share a room, so we go to bed at different times and she’ll be in the room really late and I’ll be trying to sleep. Stuff like that.”

That coming-of-age message is something the younger Humphrey repeats throughout her work, like in her song Summer 17, which Humphrey sang at her high school graduation earlier this month.

Humphrey started writing music in middle school, and for years would play her latest collections of songs for her friends.

“I would say my songs are very heavily focused on lyrics and the music is kind of an afterthought,” she said.

She says that she will continue playing music this fall at Brown University, but will be majoring in modern culture and media studies to pursue a film career.

“Writing is like my therapy,” Humphrey said. “I feel so clouded if I’m not writing and getting out the emotions. Sometimes it’s not through writing music, but maybe it’s poetry and just writing in a journal, but I prefer the songwriting. I don’t know if there’s really a world where I’m not songwriting in the future, at least in some capacity.”

She cites Taylor Swift as her major artistic influence, as well as the 2012 coming of age film The Perks of Being a Wallflower.

“There’s this one scene where they go and they’re going through a tunnel in the car, and ‘Heroes‘ by David Bowie is blasting and they stand up in the car and they’re going through a tunnel and the lights are flashing,” Humphrey said of the movie. “I remember when I saw that scene I was going on a road trip somewhere. It was dark and I was just watching the movie on an iPad and I just like felt so many emotions at one time.  I was overwhelmed, and now I want to be able to make something to make people feel  just like that.”