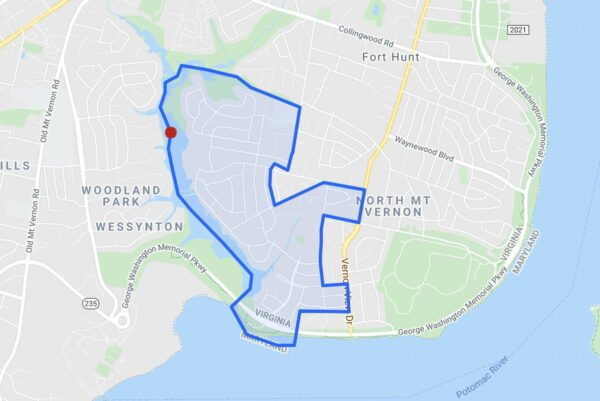 This Neighborhood Spotlight is brought to you by The Seward Group of TTR Sotheby’s International Realty.

Located just 15 miles south of Washington D.C. along the Potomac River lies the bedroom community of Stratford Landing, one of four neighborhoods located in Fort Hunt.

According to a 2019 article published by The Washington Post, “driving down Fort Hunt Road in Alexandria, the center of the Fort Hunt neighborhood, you are swept back to an idyllic time of post-World War II suburbia, where split levels and kids on bikes ruled the streets and Little League games dominated Saturday activities.”

The article continues to describe Stratford as “a classic suburb that has resisted commercial buildup… just single-family homes for its population of almost 17,000 mostly families and retirees.” Stratford itself has over 700 homes.

The Stratford community is divided into two legal subdivisions, Stratford on the Potomac and Stratford Landing. The community is surrounded on three sides by water. According to the bylaws for the Stratford Landing Citizen’s Association, it’s “bounded on the South by the tributary of the Little Hunting Creek that runs parallel to Creek Drive; on the West by Little Hunting Creek; on the North by the tributary of Little Hunting Creek that runs parallel to the East-West course of Brewster Drive; and on the East by Riverside Road and a line extending Riverside Road but also including Wittington Boulevard and its feeder roads.”

In 1956, Long Island builders Ernest C. Beck and Walter Beck began their development of Stratford Landing, starting with 110 homes. In 1957, utilities and paved roads arrived along with the construction of even more homes. The success of the development was shouted through advertisements in The Washington Post and Times Herald!

Nature and land preservation is a big part of Stratford Landing. With yearly community cleanups, residents join together on organized days to help pick up trash, mow common areas, and trim overgrown foliage, including tasks as simple as trimming the vines from the neighborhood sign!

Wildlife and its preservation are also a big part of life in Stratford Landing. Sightings of fox darting across driveways, deer quietly crossing through backyards or even eagles flying overhead are daily occurrences and cherished by the residents.

The residents of Stratford take a vested interest in connecting to their neighbors. Anne Merchant brought over a loaf of homemade banana bread to welcome new neighbors while Carrie Sessine left a card and a bottle of wine on her neighbor’s doorstep. When Stratford residents had their babies, neighbors created a sign-up sheet for a meal chain to help out with nightly dinners for a few weeks. And when another resident lost her husband, neighbors banded in support ranging from meals to daily check-ins.

When asked why she moved her family from D.C. out to the Stratford area, Ellen King stated that they “would spend most of our weekends leaving our home in the busy city just to frequent trials and parks along the Potomac. We loved seeing the bald eagles and nests along the parkway and simply loved the calm atmosphere of all of it so close to Washington D.C.. We fell in love with the tree-lined streets, scenic views and wooded backyards that Stratford provided. We finally decided to make it permanent and settle down here to raise our kids. It was the greatest decision we ever made!”

This fact, not surprisingly, provides a huge draw for those who face commuting to and from the city for work. The proximity to Fort Belvoir, the Pentagon, Andrews AFB and Bolling AFB make this neighborhood a favorite among military, in particular. After living in 11 different locations in 17 years, Laura Catron decided that this is where she wanted to stay for good after her husband retires.

“It is the perfect blend of city life and suburbia [for us],” she says.

Laura’s husband, Kevin, chose to live in the area because of the easy commute to work, the closeness to Old Town (a favorite hangout) and the direct route to Reagan International Airport since much of his work involved travel.

While Stratford itself does not have any restaurants, several local favorite eateries are just a couple of minutes down Fort Hunt Road along with several small stores including The Variety Store and the local Safeway. Around the corner from Stratford on Elkin, the local 7-Eleven is a favorite hangout for kids after school or to grab ice cream on hot days. There is also a small gas station, Fort Hunt Veterinarian (a favorite) and a small dry cleaner.

The best hidden gem for a date night, Cedar Knoll Restaurant, is on the periphery of Stratford Landing, a beautiful restaurant known for its historic atmosphere and enchanting view of the Potomac River. According to its website, “Our mission has always been to provide an extraordinary dining experience through the historic, waterfront ambiance, attentive service and regional, seasonal cuisine.” Stratford residents can walk or drive to the restaurant, depending on where they live in the neighborhood.

Another draw for families to the Stratford area is the walkability to the two elementary schools, Fort Hunt and Stratford Elementary. Which school you are zoned for depends on which street you live on, with the Childs Lane as the dividing line. Older students can also walk or ride their bikes to Carl Sandburg Middle School but need to drive for the zoned public school, West Potomac High School.

Homes in Stratford Landing are generally older, from the 1960s to 1970s, though most have been renovated. The area is a continual hotbed of demand, as evidenced by slow turnover in houses. Many of the residents have been here for years, moving in when their children are younger to raise their families here.

Although Stratford has always been a highly sought-after community, Covid only intensified the demand. The shift from the office space to creating it at home, in addition to businesses pivoting to operating remotely, created a booming surge for larger residential homes that reached groundbreaking levels for the area.

From January to April of this year, the average sales prices increased in addition to the number of homes sold, compared to 2020. 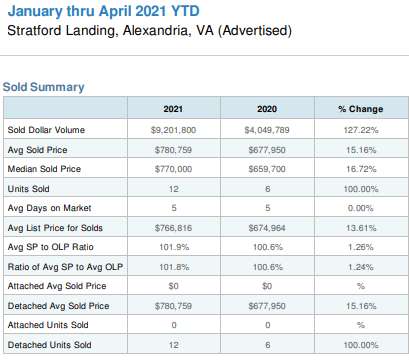 The Stratford Landing Association is a wonderful resource for anyone looking for more information about the neighborhood.

If you are interested in exploring real estate in the Stratford area, or any other area, one of our agents would be happy to set up an appointment with you! We can be reached by:

We are licensed in Virginia, D.C. and Maryland and are located at TTR Sotheby’s International Realty in Old Town Alexandria.