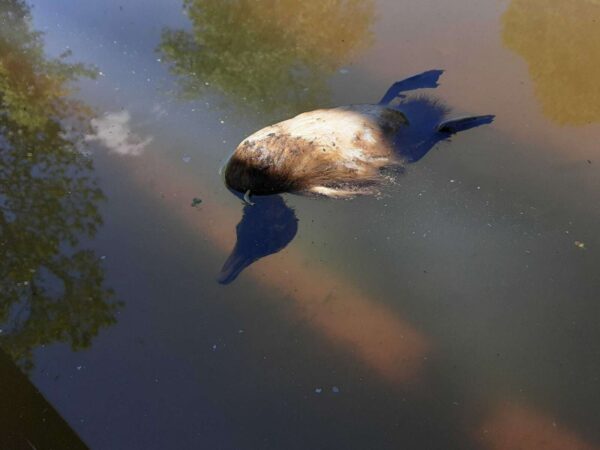 A week after an accidental discharge from Cameron Run Regional Park contaminated Lake Cook next door, the City of Alexandria said the cleanup process is finished and the lake will be safe for activities like fishing at the end of the week.

“According to the Fire Marshals Office, NOVA Parks has completed the cleanup process with the environmental contractor,” said Kelly Gilfillen, a spokesperson for the city, “[they] are are permitted to resume normal operations of the pool at this time, as it appears they have satisfactorily addressed the obvious issues they were cited for.”

Lake Cook is a designated fishing spot and currently, signs are posted saying that all fishing at the lake should be catch and release only. Gilfillen said the city intends to remove these signs by the end of the week to allow normal fishing activities to resume.

The fish kill in the lake was caused by an excess of chlorine that spilled into Lake Cook when an employee at Cameron Run Regional Park mistakenly used an outdated valve that drained a pool into the nearby water.

“Approximately 60,000 gallons of chlorinated water from the play pool entered the lake over the course of 9 to 12 hours through a piped connection that the operator thought connected directly to the sanitary sewer, rather than the lake facility,” the city said.

The city said approximately 150 fish and one bird were killed due to high chlorine exposure, though an photos from the incident and an ALXnow reporter indicate multiple dead birds at the lake.

Cameron Run Regional Park was issued a notice of violation for the illegal discharge and NOVA Parks told ALXnow the outdated valve will be removed from the park to prevent a future incident.

Read more →
More Stories
Alexandria man arrested after allegedly eluding police outside William Ramsay Elementary SchoolAsk McEnearney: Do you have suggestions for people trying to buy a home in this hot market?