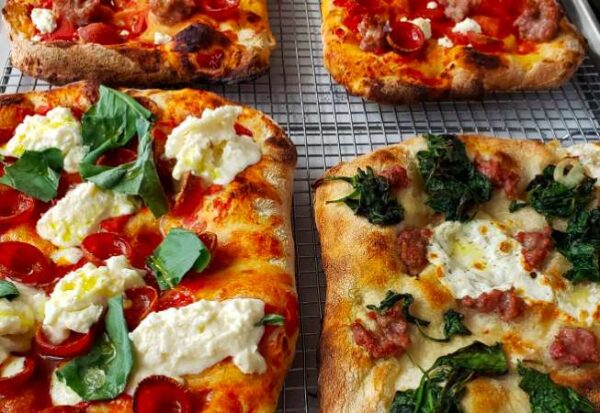 Roman-style pizza is finding a permanent home in Del Ray.

Stracci Pizza submitted a special use permit (SUP) to run a restaurant out of the former Nectar Coffee & Wine Bistro at 106 Hume Avenue.

Owners Thomas and Annalisa Cardarelli expect the restaurant to open this summer. The pair moved to Rosemont four years ago when he was hired as the executive chef at Vermilion in Old Town.

They opened Stracci as a food truck on Feb. 1, and are now asking that customers pre-order on their website since they frequently sell out. The truck is currently parked outside 106 Hume Avenue and is open Tuesday through Sunday from 5 p.m. to 8 p.m.

“It will be open for dinner in the evenings and we’re hoping to start seating with outside as we’re still coming out of COVID,” Annalisa Cardarelli told ALXnow.

The Cardarelli’s are not looking to renovate the building, which, when it was Nectar, had 40 indoor seats and 18 outdoor seats.

The menu includes rectangular pizzas with “high-hydration dough that is naturally fermented at cold temperatures for 72 hours,” according to the Stracci Pizza website. “The long fermentation process combined with special dough handling and baking ‘alla pala’ (directly on the hearth) result in a crust that is crisp, light and airy.”

The SUP was filed on April 1, and public comments are open until April 29.