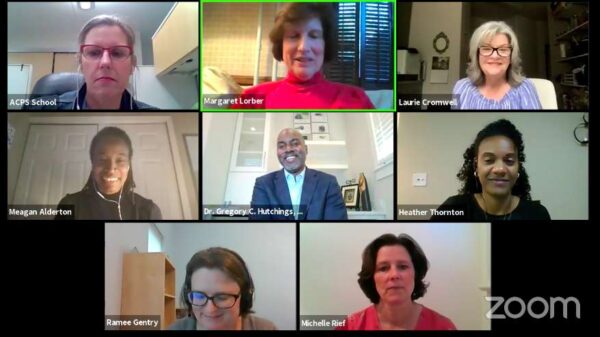 The Alexandria School Board has nine members and roughly 16,000 students, and some Board members think the school system could be more efficient if it was smaller.

“We’re actually hurting the efficiency and the goal being achieved within the division of the group this big,” School Board Vice Chair Veronica Nolan said in a Board retreat Tuesday night. “I think we can achieve more for the division by having six (members).”

Mayor Justin Wilson wants to talk about the issue, as a Board reduction would require City Council approval.

“It is a large Board,” Wilson told ALXnow. “I’d want to have some dialogue with the Board on the issue, but nine people is a lot of people.”

The Board expanded from six members to nine members in 1964.

“I think communication can be more difficult when you’ve got nine people,” Board Member Cindy Anderson said, adding that the size of the body leads to long Board meetings that are a turnoff for the community. “If you have nine people asking a question on any topic, you can only make it so short. It’s just mathematically impossible to make (Board meetings) that much shorter.”

Board Members Michelle Rief and Margaret Lorber are against reducing the number of seats.

“I spoke with a board member in Arlington, about the size of their board,” Rief said. “The feedback I received was that they wish they were larger, because when it comes to workload and things like trying to assign ad hoc committees to do different things, it’s really challenging.”

Rief continued, “I’m just not sure that reducing our board is really going to achieve some of the things that folks are talking about. I think that we have real challenges right now. We have to try to provide a days of in-person instruction in the fall, we have to build new schools, repair old schools, we have to implement the first ever connected High School Network. There’s just so many things, and I don’t see changing the School Board is going to solve any of these problems, nor do I think that our community really has any interest in this issue. No one in the community has ever said, ‘Michelle, you really need to make it smaller.'”

A number of Board members also want staggered three-year terms, although that would require City Council to also adopt a similar change to its election cycle, and then send the request to the General Assembly for approval. That will likely not happen, as Council voted 5-2 in 2009 to move municipal elections from May to November, effectively pushing out Republican hopes for winning a local election. No Republican has won a City Council seat in an election since.

“Council had no problem years ago when it served their political interests to move this election from the spring up to November,” Board Member Chris Suarez said. “Now, we all know why. Politically there are reasons that was done. I’ll just be very blunt about that. So, there was a will, there was a way to make changes.”

At the conclusion of the discussion, School Board Chair Meagan Alderton asked staff to prepare a SWOT (strengths, weaknesses, opportunities and threats) analysis on reducing the number of Board members and staggering elections to present to Council.